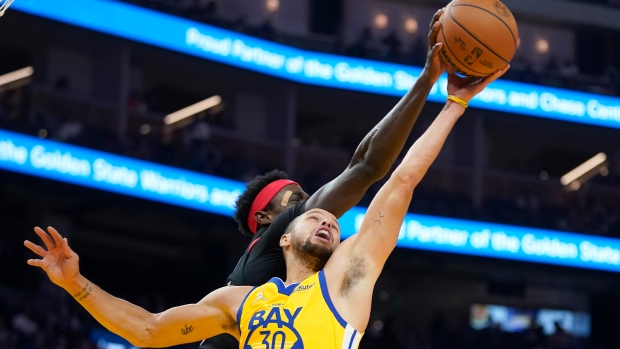 Poole shot 10 for 13 with eight 3-pointers and became the first Warriors player aside from Stephen Curry with consecutive 30-point outings since D'Angelo Russell did so in three in a row from Dec. 27, 2019-Jan. 12, 2020.

Curry scored just 12 points but had eight assists after the reigning scoring champion sat out a 105-102 win at Detroit on Friday night to rest his sore hip on the second night of a back-to-back. Curry began 1 for 7 and finished 2 of 10 from the floor.

Wiggins made his first five shots for 14 early points and Golden State started 9 for 14 to build a 27-9 lead late in the opening quarter. The Warriors (15-2) never trailed in winning their fourth straight and 11th in 12.

Pascal Siakam scored 21 points and Fred VanVleet had 17 points and seven assists for the Raptors.

VanVleet's back-to-back 3-pointers midway through the fourth pulled Toronto within 103-93 before Golden State called a timeout with 7:16 to play.

The Raptors had won four of the last five meetings overall with the Warriors.

Warriors: G Andre Iguodala sat out a second straight game nursing a tender right knee while Gary Payton II was out as he continues to recover from surgery on his right hernia. ... Otto Porter Jr. returned from sitting out a game protecting a foot injury and scored 15 points off the bench to go with five rebounds. ... Golden State has scored 100 or more points in every game - the only NBA team to do so.

The Warriors and Riot Games announced Sunday that Chase Center will be host to the 2022 League of Legends World Championship Finals premier esports event - and Toronto will serve as a semifinal host city.