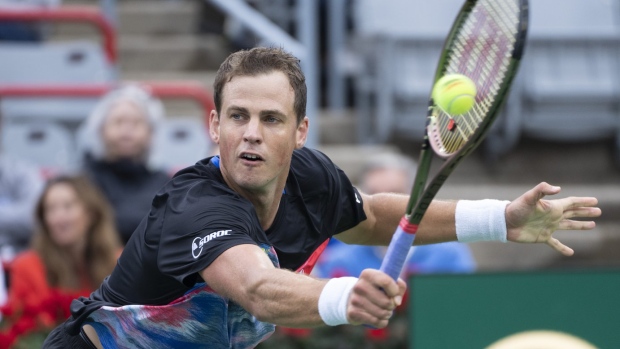 Canada's Vasek Pospisil returns to Tommy Paul of the United States during first round action at the National Bank Open tennis tournament Tuesday August 9, 2022 in Montreal. THE CANADIAN PRESS/Paul Chiasson

It's difficult to talk about the Vancouver tennis scene without the names of Rebecca Marino and Vasek Pospisil popping up.

They are lovable underdogs, passionate players, gritty fighters and, in the case of the annual Odlum Brown VanOpen, great draws and ambassadors.

So it was fitting Wednesday, on one of the hottest nights of Vancouver's summer, the 32-year-old Pospisil sweated two hours and 40 minutes to post a thrilling 3-6, 6-2, 6-3 men's singles victory over Jordan Thompson of Australia at the Hollyburn Country Club to advance to the ATP Challenger event's quarterfinals.

The popular B.C. athlete, who while growing up in the Okanagan community of Vernon became a thing on the tennis court, now calls Vancouver home. And Wednesday night, the West Coast tennis fans were proud of his never-say-die approach in the intense heat.

The Vancouver-based Marino, who lost a tough singles match the night before, hooked up with Heather Watson of Britain on Wednesday to defeat Emily Webley-Smith of Britain and Ingrid Gamarra Martins of Brazil 6-4, 6-1 in the women's doubles round of 16.

Earlier in the day, Valentini Grammatikopoulou of Greece bounced Cadence Brace of Toronto 7-5, 6-2 in the women's singles round of 16.

In men's doubles, Benjamin Sigouin of Vancouver and Alexis Galarneau of Laval, Que., outlasted Robert Galloway of South Carolina and Alex Lawson of Arizona 6-3, 3-6, 10-7 in the round of 16.