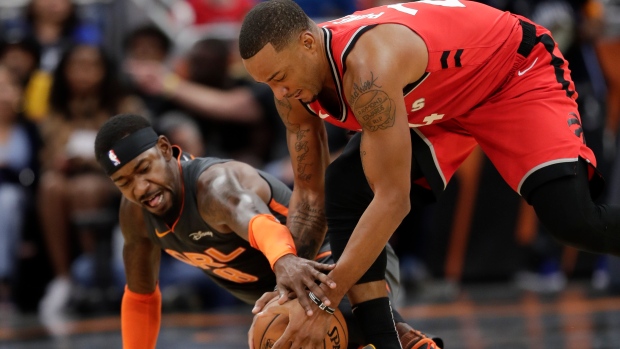 Powell was 7-for-9 shooting in the third quarter, including three 3-pointers.

Fred Van Fleet added 22 points for the Raptors, who won despite Pascal Siakam's 4-for-22 shooting. Siakam finished with 10 points and 13 rebounds.

The Magic led by 11 twice in the first half. Van Fleet hit a pair of 3-pointers that helped the Raptors cut Orlando's lead to 47-40 by halftime.

Powell scored Toronto's first 10 points in the second half, eight as part of a 13-0 run that gave the Raptors a 60-53 lead late in the third quarter.

Powell's final 3-pointer gave Toronto an 83-72 lead, their largest of the game, with less than three minutes left.

Magic: C Nikola Vucevic missed a fourth straight game with a sprained right ankle. ...The Magic unveiled new grey and orange City Edition uniforms. ... For the 27th straight year, the Magic served Thanksgiving Breakfast at the Coalition for the Homeless of Central Florida on Thursday. Coach Steve Clifford sponsored the meal, while CEO Alex Martins led a contingent of Magic staff in serving breakfast to more than 700 men, women and children.

Toronto Raptors' Pascal Siakam (43) looks to pass the ball as he tries to get around Orlando Magic's Jonathan Isaac, left, during the first half of an NBA basketball game, Friday, Nov. 29, 2019, in Orlando, Fla. (AP Photo/John Raoux)