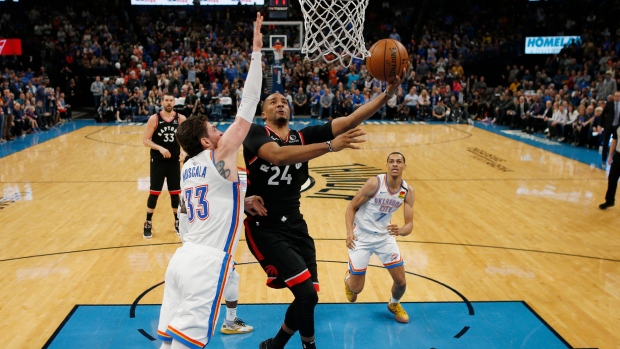 Pascal Siakam and OG Anunoby each added 21 points for the Raptors, who shot a season-high 61.2% from the field.

Dennis Schroder scored 25 points, Danilo Gallinari scored 23 and Shai Gilgeous-Alexader added 21 for the Thunder, who cut a 30-point deficit to three before Toronto held on.

Toronto led 73-43 in the second quarter before the Thunder closed the first half on a 12-0 run. Gilgeous-Alexander hit a 3-pointer as time expired in the second quarter to cut Toronto's lead to 73-55. Former Thunder player Serge Ibaka scored 13 points on 6-for-6 shooting before the break. The Raptors led 97-83 heading into the fourth, and had a 21-point lead with 6:39 to play.

Oklahoma City made a huge comeback try late. Gallinari threw down a monster dunk and was fouled with 2:39 to play. The free throw cut Toronto's lead to three, but Toronto closed the game on an 8-2 run.

Raptors: Coach Nick Nurse said G Fred Van Vleet should be ready to play this weekend. Van Vleet has missed four consecutive games with a right hamstring strain. ... C Marc Gasol returned after missing 12 games with a left hamstring pull. He finished with 15 points in 32 minutes. ... Had five players score in double figures in the first half. ... G Kyle Lowry was called for a technical in the third quarter.

Thunder: C Nerlens Noel missed his sixth straight game with a left ankle sprain. ... C Steven Adams left the game in the first half with a right knee contusion and did not return. ... C Justin Patton scored 45 points in a G-League game on Tuesday. ... C Mike Muscala scored a season-high 17 points.