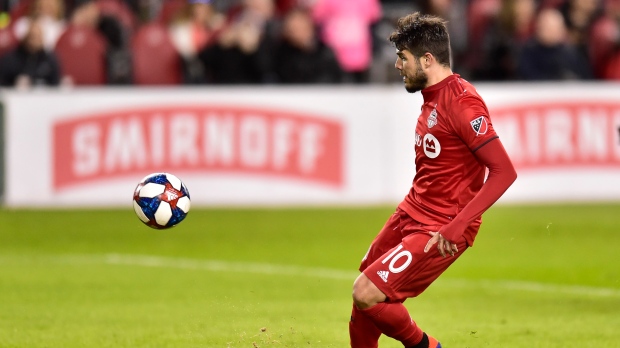 Toronto FC's Alejandro Pozuelo chips over the keeper to score on a penalty shot against New York City during second half MLS action in Toronto, Friday, March 29, 2019. THE CANADIAN PRESS/Frank Gunn

HARRISON, N.J. - Alex Bono tied a club record with his 28th clean sheet and Alejandro Pozuelo showed off his mastery over New York City FC from the penalty spot in a 1-0 Toronto FC win Wednesday.

But Toronto survived and went ahead on a 90th-minute penalty after substitute Justin Morrow's shot hit Nicolas Acevedo's arm. Pozuelo outguessed goalkeeper Sean Johnson, rolling the ball past him for the win - and his fifth goal of the season.

“He's a specialist, there's absolutely no doubt about that,” Bono said of Pozuelo's penalty spot prowess.

“It's very difficult to read ... I've seen it. I've succeeded about as many times as other goalkeepers have against him,” he added.

The Spaniard has now converted nine of 10 penalty attempts for TFC, missing one of two spot kicks in a 1-1 tie against NYCFC at Yankee Stadium last September. An attempt to pass the ball from the penalty spot to teammate Pablo Piatti in a 1-0 loss to Montreal earlier this month apparently is not considered an attempt.

Johnson, meanwhile, has been beaten on six of seven Toronto penalty attempts with Pozuelo besting him four of five times.

Pozuelo came close to creating the winner from a free kick in the 82nd minute Wednesday but Omar Gonzalez's header flashed wide.

NYCFC (5-6-2) offered more on offence but was unable to beat Bono, with Quentin Westberg given the night off. Bono has yet to give up a goal in two starts this season and now sits tied with Stefan Frei for the club lead in shutouts in all competitions.

“Listen, by no means was it an awesome performance from us but we found a way. And that's what it's going to be about the rest of the season,” said Bono. “It's extraordinary circumstances.”

“They gutted it out, they grinded it. They did whatever they had to do. Bones (Bono) made some big saves ... For me, wins like tonight are sometimes more valuable than the wins you get when you play teams off the field.”

With the baseball season ongoing, NYCFC is playing its home games at Red Bull Arena in adjoining New Jersey.

Toronto, with U.S. teams unable to cross the border because of the pandemic, is playing its home games at Pratt & Whitney Stadium at Rentschler Field in East Hartford, Conn. TFC entertains Columbus Crew SC on Sunday in its first game there.

Westberg, Morrow and Eriq Zavaleta moved to the bench. Midfielder Marky Delgado did not dress after taking a knock to the knee in Saturday's 2-2 tie at D.C. United.

Vanney called it “a bit of a makeshift group,” with some players asked to take on different roles than normal.

Altidore marked his 150th game in all competitions for Toronto while Mavinga marked game No. 100.

The New Yorkers had the better of the first half and Toronto was wobbling on defence when the whistle blew for halftime. NYCFC outshot TFC 10-3 (5-1 in shots on target) in the first 45 minutes.

Toronto teenager Jayden Nelson made his regular-season debut off the bench in the 61st. It took the 17-year-old midfielder just three minutes to earn a yellow card for a shoulder charge.

Brazilian forward Heber, NYCFC's leading goal-scorer in 2019, was stretchered off in the 87th minute with an apparent knee injury.

It was Toronto's third meeting with the New Yorkers this season.

Toronto defeated NYCFC 1-0 when the two teams met at BMO Field on March 7 prior to the pandemic shutdown. New York had its revenge at the MLS is Back Tournament in Florida, dispatching Toronto 3-1 in the round of 16 on July 26 in a game that did not count in the regular-season standings.

The teams have post-season history. Toronto ended NYCFC's playoff hopes in both 2016 and 2019.