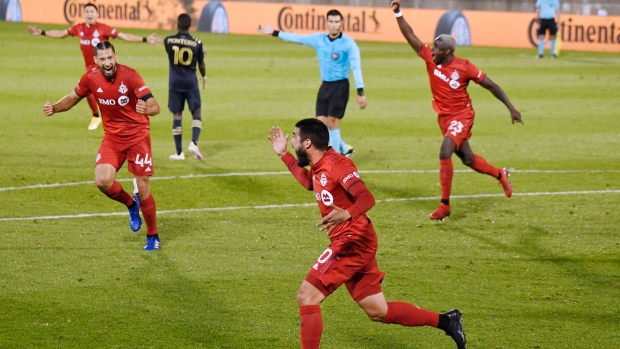 Toronto FC's Alejandro Pozuelo, front center, celebrates his goal with his teammates during the second half of an MLS soccer match against the Philadelphia Union, Saturday, Oct. 3, 2020, in East Hartford, Conn. (AP Photo/Jessica Hill)

EAST HARTFORD - Forced to play away from home and family because of the pandemic, Toronto FC keeps on rolling.

Greg Vanney's team has had to overcome obstacles on and off the field in posting consecutive victories over New York City FC, Columbus and Philadelphia. Toronto needed a 90th-minute Pozuelo penalty kick to edge NYCFC 1-0 and a three-goal second-half rally to beat back Columbus.

Against Columbus, TFC trailed 1-0 on an own goal. Against Philadelphia, Toronto was down 1-0 after just five minutes. Both times, TFC turned it on in the second half.

Off the field, Toronto -- like Montreal and Vancouver -- has had to relocate south of the border because of travel restrictions barring U.S. teams from entering Canada.

“But we're in this together and that definitely brings us a lot closer together. We're staying in the same place, so we're with each other all the time -- for every meal. And that helps. Guys are helping each other out, keeping the spirits up at all times. Were all trying to get through this in our ways, but together.”

Added Vanney: “We can't be excuse-oriented. We need to be problem-solving. We need to be open-minded and find ways to adapt during a difficult time. I think that off-the-field mindset has translated on the field. And the group continues to grow together.”

Toronto (9-2-4) briefly moved atop the league standings with Saturday's win but finished the night second on goal difference after Columbus rallied to tie FC Dallas 2-2.

The game, the second at TFC's pandemic home of Pratt and Whitney Stadium at Rentschler Field, was the first of five in 16 days for Toronto. Next up is a match in New England, followed by dates with Cincinnati, the Red Bulls and Atlanta.

TFC's winning goal came in the 76th minute after Chris Mavinga flicked on a header from a corner to an unmarked Pozuelo at the far post for his seventh of the season and fourth in as many games.

It marked the fourth game-winning goal of the season and third straight for Pozuelo, who was voted MLS player of the month in September. The Spanish playmaker, making a strong case for MVP honours, came into weekend play with a league-leading nine assists.

Toronto extended its unbeaten run to five (4-0-1). But the win may have come at a cost, however. TFC lost both fullback Justin Morrow and striker Jozy Altidore to injury during the match.

Morrow, who turns 33 Sunday, gave way to Tony Gallacher in the 39th minute after going down. A trainer iced his right calf on the sidelines as the veteran fullback held his head in his hands. Altidore exited early in the 53rd minute after grabbing the back of his left thigh as he went for a ball.

Vanney said it was likely a hamstring issue for Altidore, who has a history with such. The U.S. international, who has suffered through a stop-and-go season, will undergo a scan to determine the severity of the injury.

Toronto had 58 per cent possession and outshot Philadelphia 13-9 although the Union had a 5-3 edge in shots on target.

The Union went ahead in the fifth minute on the game's first shot. Mavinga's attempted header clearance went to a Philadelphia player who sent the ball towards Santos. The Brazilian outpaced defender Omar Gonzalez, who flubbed a clearance, and chipped goalkeeper Quentin Westberg from a tight angle.

Westberg made a marvellous save in the 30th minute, flying through the air to push Dutch-born Cape Verde international Jamiro Monteiro's long-range shot off the crossbar. He then stopped Kacper Przybylko on the rebound but the play was called offside.

Toronto had almost 65 per cent of possession in the first half but that translated into just one shot on target.

Akinola tied it in the 58th minute, the beneficiary of two fine long-range passes -- the first from Marky Delgado and then the set-up from Gallacher. The Scottish fullback floated a perfect cross for Akinola, splitting the centre backs, to beat Andre Blake with a header.

Toronto fielded an unchanged lineup from the side that beat Columbus last Sunday. The TFC travelling party chartered home after the game, returning to Hartford on Wednesday.

This report by The Canadian Press was first published Oct. 3, 2020