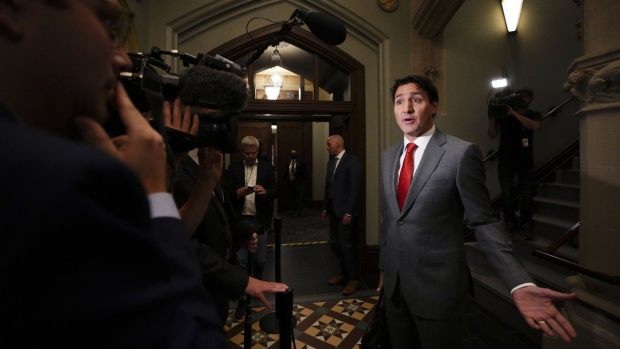 Prime Minister Justin Trudeau comments on Hockey Canada as he arrives on Parliament Hill in Ottawa on Thursday, Oct. 6, 2022. THE CANADIAN PRESS/Sean Kilpatrick

Justin Trudeau says the federal government isn't in the business of creating organizations.

But as scandal-plagued Hockey Canada continues to vigorously defend its leadership amid a landslide of criticism over the national organization's handling of alleged sexual assaults - and how money was paid out to settle lawsuits - the prime minister swung the door open on that possibility Thursday.

Halifax and Moncton, N.B., are set to host the 2023 world junior hockey championship in December and January, but Nova Scotia Premier Tim Houston said his province would have to see “meaningful changes that respect the concerns of Nova Scotians and Canadians” before the tournament can go ahead.

The comments came amid another rough week for the federation following Tuesday's Standing Committee on Canadian Heritage meeting where former Hockey Canada board chair Michael Brind'Amour and interim chair Andrea Skinner were grilled about why president and chief executive officer Scott Smith had not been fired.

Parliamentarians also wanted to know why an expensive public relations firm was hired by Hockey Canada to help with damage control.

“I think that would be very impactful in a negative way to all of our boys and girls who are playing hockey,” Skinner testified Tuesday of mass resignations or firings. “Will the lights stay on at the rink? I don't know. We can't predict that.

Trudeau said Thursday the organization has “completely lost the confidence of Canadians,” adding it's “inconceivable” the sport's national governing body remains steadfastly behind its current leaders.

“It's not like there's something extraordinarily special about the people at Hockey Canada that means they are the only people in the country that can run an organization like this,” the prime minister said.

“There's lots of people who could run it, and unfortunately, the total loss of faith in that organization by everyone means that it's nonsensical that they'd be digging in their heels on this one.”

Corporate partners pulled money for the men's program this week, while a pair of powerful provincial organizations spoke out against Hockey Canada.

“Hockey Canada's leaders are losing support,” Minister of Sport Pascale St-Onge said Thursday on Parliament Hill. “They no longer have the support of their sponsors, of Canadian families that are sending their kids to play hockey. They're also losing support from their own members.

“I hope that they understand the message and leave before they burn it to the ground.”

St-Onge added that it would be up to the country's 13 provincial and territorial bodies to decide what happens with Hockey Canada.

“We're going to support whatever they decide,” she said.

The federal government paused funding to Hockey Canada in the spring after news broke it had quickly and quietly settled a $3.55-million lawsuit with a woman who alleged she was sexually assaulted by eight players - including members of the country's world junior team - after a 2018 gala in London, Ont.

The allegations have not been proven in court.

Among other revelations that followed was that Hockey Canada drew on a fund partly maintained by minor hockey registration fees to pay for uninsured liabilities, including sexual abuse claims. Halifax police were also subsequently asked to investigate an alleged sexual assault by members of the 2003 junior men's team.

Hockey Canada officials have been called to testify on Parliament Hill three times since the middle of June.

It was revealed at the July hearings Hockey Canada had paid out $7.6 million in nine settlements related to sexual assault and abuse claims since 1989.

That figure didn't include this year's undisclosed payout to the London plaintiff. Hockey Canada said the majority of the $7.6 million went to the victims of junior hockey coach Graham James.

Meanwhile, both two provincial hockey organizations disavowed Hockey Canada this week over its handling of the allegations.

Hockey Quebec said it has lost confidence in Hockey Canada and will not transfer funds to the national organization.

The Ontario Hockey Federation, the largest provincial and territorial hockey association with more than 200,000 members, has asked a second time that Hockey Canada not collect the $3 participant assessment fee from its members for the 2022-23 season.

On the sponsorship front, Canadian Tire Corp. announced Thursday the retailer has ended its partnership with Hockey Canada.

Tim Hortons, Telus Corp., and Scotiabank have all pulled men's program funding for the upcoming season, but will continue to support women's, para and grassroots programs.

The companies all initially paused sponsorship dollars for the men's program in the spring.

“There is a lack of understanding that they've lost the confidence of Canadians,” Trudeau said Thursday.

“And the sooner they get to that, the better it will be for everyone.”

-With files from Mia Rabson in Ottawa.