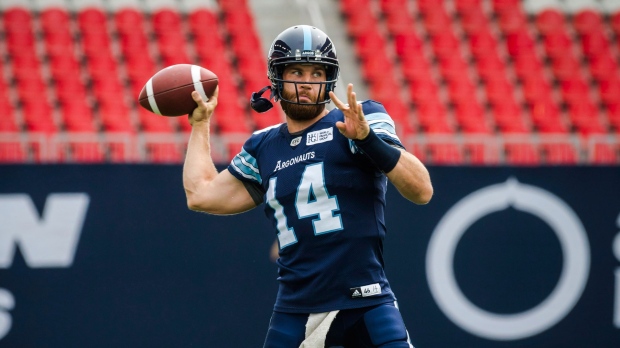 Toronto Argonauts quarterback McLeod Bethel-Thompson (14) throws before CFL action against the BC Lions, in Toronto on Sunday, August 18, 2018. THE CANADIAN PRESS/Christopher Katsarov

TORONTO - It seems as McLeod Bethel-Thompson goes, so go the Toronto Argonauts.

After starting the season 0-6, Toronto has gone 2-3 in its last five games. Following early struggles as the Argos' starting quarterback, Bethel-Thompson has significantly cleaned up his game and is now playing his best football of the season.

“That's two interceptions too many,” Bethel-Thompson said Thursday. “My job is to protect this team and put it in position to win and that can't happen with interceptions.

“(On Friday), I've got to protect the football. I think we're playing better football than we were earlier in the season, for sure. We're just more of a cohesive unit and not shooting ourselves in the foot.”

Bethel-Thompson has multiple TD passes in five straight games and cracked the 300-yard passing plateau in four of them. He's also engineered 14 touchdown drives in Toronto's last five games with the Argos' offence averaging 418 net yards over that span.

Bethel-Thompson leads the CFL in TD passes (19) and stands second in passing (3,004 yards).

Calgary is 3-0 since starting quarterback Bo Levi Mitchell's return and the '18 CFL/Grey Cup MVP hasn't been sacked in those contests. What's more, Mitchell boasts a 10-0 career record against Toronto and the Stampeders have won 11 straight against the Argos.

Calgary hasn't lost in Toronto since 2012 - a stretch of six games. But on Friday night, the Stampeders will be without slotback Reginald Begelton and Canadian middle linebacker Cory Greenwood due to injury.

Begelton has a CFL-best 1,036 receiving yards and seven TDs on 72 catches while Greenwood, of Kingston, Ont., leads the league in tackles (79).

“Bo is one of the top quarterbacks in the league, everybody knows that,” said Argos defensive tackle Cleyon Laing. “The last time we played them we were able to get to the quarterback four times.

“It wasn't Bo back there but it's the same linemen protecting him. If we can do our job, get some pressure on him and make him uncomfortable, we should be able to get it done.”

Toronto registered four sacks in a 26-16 road loss to Calgary on July 18. But they came against youngster Nick Arbuckle, who was 20-of-30 passing for 191 yards with two TDs and two interceptions with Mitchell (pectoral muscle) sidelined.

Bethel-Thompson threw for 343 yards but had more picks (four) than touchdowns (two). The next week, Toronto lost 26-0 in Edmonton as Bethel-Thompson was replaced by Dakota Prukop in the second half and finished six-of-18 passing for 90 yards and an interception.

“That (Calgary loss) was the beginning of the death . . . I think the full death was in Edmonton,” Bethel-Thompson said. “That was a tough game because the defence played well and we felt like the offence squandered a lot of opportunities.”

But on Aug. 1, Bethel-Thompson had 343 passing yards and three TDs while rushing for 44 yards on five carries to rally Toronto to its first win of the season, a thrilling 28-27 home decision over Winnipeg.

Toronto is coming off a 46-17 road win over Ottawa on Sept. 7. After failing to make half-time advantages stand in consecutive losses to Montreal (28-22) and Hamilton (38-27), the Argos outscored the Redblacks 28-4 in the second half to cement the victory.

“Then there was two weeks in a row where we started fast and were winning at the half but there were some letdowns towards the end. I think (Ottawa win) was the first time we put a complete game together.”

Calgary's defence has a CFL-high 19 interceptions and is tied with Winnipeg for most turnovers forced (35). The Stampeders have scored a league-high 93 points off turnovers, a whopping 30 more than the second-place Blue Bombers.

“I love the challenge,” Bethel-Thompson said. “These are the teams you want to play against.

“They're the best team in the league right now. That's how I feel, that's how we feel. We're excited to have them in our house to slug it out for 60 minutes and sees what happens.”

HOT HANDS 2: Receiver Derel Walker has scored four of his six TDs this season in Toronto's last three games. And running back James Wilder Jr. scored three of his five touchdowns in the win over Ottawa.