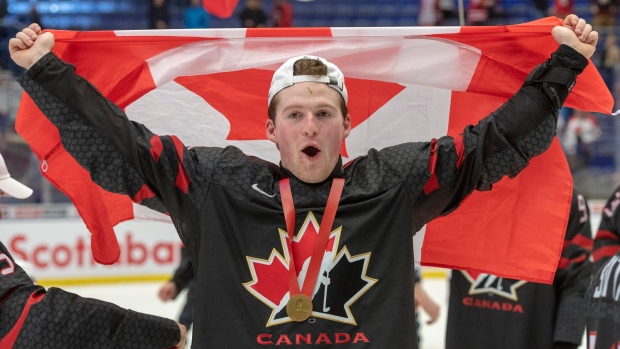 RED DEER, Alta. - Alexis Lafreniere will not be going for another gold medal this winter.

Hockey Canada said in a statement Thursday that the NHL's New York Rangers will not loan Lafreniere to Canada's team for the upcoming world junior hockey championship in Edmonton.

The Rangers selected Lafreniere with the first-overall pick at this year's NHL draft.

Lafreniere led Canada to a gold medal at the 2020 junior championship in the Czech Republic. He had four goals and six assists in five games and was named tournament MVP.

He was not on Canada's roster for its junior camp in Red Deer, Alta., though Hockey Canada had said it was holding out hope that he would join the team.

All activity at Canada's camp has been suspended from Nov. 25 until at least Sunday after two players and a staff member tested positive for COVID-19

This report by The Canadian Press was first published Dec. 03, 2020.