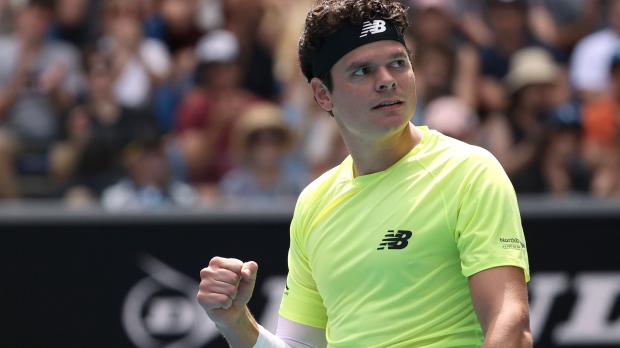 MELBOURNE, Australia - Milos Raonic is into the Australian Open men's singles quarterfinals for the fifth time in the last six years.

The 29-year-old Canadian backed up a straight-sets upset of No. 6 seed Stefanos Tsitsipas on Friday with a 6-4, 6-3, 7-5 win over Croatia's Marin Cilic in the fourth round Sunday afternoon.

“I did a lot of things really well. I had the idea of how I wanted to play and I was happy I could execute and sort of live up to that,” Raonic said.

As a reward, Raonic will get an opportunity to do something he hasn't yet been able to accomplish in his career: beat Novak Djokovic.

The defending Australian Open champion defeated No. 14 seed Diego Schwartzman of Argentina 6-3, 6-4, 6-4 later Sunday to set up a showdown with Raonic in the quarters. Djokovic has a 9-0 career record against the big-serving Canadian.

Cilic, part of Raonic's generation of players and also a mainstay in the top 10 for many years, has struggled over the last 12 months and watched his ranking tumble out of the top 30.

The 2014 US Open champion was hampered by a lower back issue Sunday, exacerbated by the four hours and 10 minutes he needed to upset No. 9 seed Roberto Bautista Agut of Spain in the previous round.

But there wasn't a lot he could do as Raonic put on another serving clinic.

The Canadian fired 35 aces, bring his total through four matches to 82. No one has broken his serve, and only two opponents have even had opportunities. Chile's Cristian Garin went 0-for-3 in the second round; Cilic went 0-for-4 Sunday.

“I was really struggling with my serve through the practice week. The first match, it didn't feel necessarily that great because it was a little bit windy on that court,” Raonic said. “I just sort of found my rhythm. Once I get my rhythm and once I have continuity of playing, it comes for me. Serving is the most natural thing for me to do.”

Cilic did earn two set points in the third set. Raonic erased the first with a 225 kph ace. He erased the second with a 210 kph ace.

Through four rounds, Raonic has yet to drop a set. And only one of the 12 he has played has gone as far as a tiebreak.

A year ago in this Melbourne, Raonic also made the quarterfinals. With that, he returned to the top 15 in the rankings for the first time in 18 months. But later in the year the Canadian's body let him down, in the way it so often has during his star-crossed career.

Raonic missed the French Open in early June, the US Open last September and then the Davis Cup Finals in Madrid in November.

“It was hard for me to skip Davis Cup, but I had to spend time, because I was ailing (with) a back issue throughout pretty much the whole year,” Raonic said. “I had to take time where I didn't serve for about a month. But it allowed me to focus on other things, put other things together and get stronger, get fitter.”

The Canadian came into 2020 with guarded optimism.

“I was able to train for about six, seven weeks straight without any hindrances, no setbacks. I was thankful for that,” he said.

Raonic retained coach Mario Tudor, who first joined him on a regular basis at the Citi Open in Washington, D.C. last summer.

But he changed up other elements. “I switched around the people that are with me, so the methods have been a little bit different in that sense. Everybody sort of rotated around what I was doing in the gym and also how I was rehabbing and these kind of things,” he said. “I spent two weeks in Boston to help focus on a few things there with a group of guys, and then I spent four weeks training down in the Caribbean.”

Raonic opened the season at the ATP Tour event in Qatar, where he lost his opening match to French left-hander Corentin Moutet. As a result, he arrived in Melbourne a little short of match play.

If he felt healthy, there was no way to anticipate that his big serve would arrive in vintage, devastating form.

Against Djokovic, five of the nine meetings have gone three sets. But only one of those has come in the last five years.

During his on-court interview after the victory over Schwartzman, Djokovic echoed similar sentiments.

“One of the key elements will be how well I'm returning, and how confident I am on my service games,” Djokovic said. “I'm really glad to see Milos healthy and playing on a really good level again. He's a great guy, we speak the same language, and I'm glad to see him in the quarters.”

Meanwhile, Ottawa's Gabriela Dabrowski and partner Jelena Ostapenko of Latvia advanced to the quarter-finals of the women's doubles tournament at the Australian Open. The No.6 seeded duo defeated American Hayley Carter and Luisa Stefani of Brazil 6-4, 1-6, 6-4 in the third round on Sunday.

By reaching the quarters, the 27-year-old Canadian matches her best result in women's doubles at the Australian Open.

In her only previous quarter-final appearance in Melbourne back in 2018, Dabrowski and former partner Yifan Xu of China fell to the eventual runner-ups - Ekaterina Makarova and Elena Vesnina.

Currently ranked eighth in the world in doubles, Dabrowski has a new partner in Ostapenko for the opening Grand Slam of the year. She split with Xu after last season.

Dabrowski also is still alive in the mixed doubles with partner Henri Kontinen of Finland.