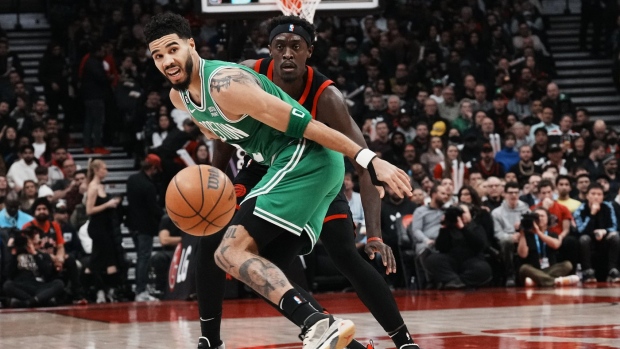 Boston Celtics Jayson Tatum, left, and Toronto Raptors Pascal Siakam eye a loose ball during first half NBA basketball action in Toronto, Monday, Dec. 5, 2022. Tatum had 31 points and 12 rebounds to lift the league-leading Boston Celtics to a 115-110 victory over the Toronto Raptors on Monday. THE CANADIAN PRESS/Chris Young

Jayson Tatum had 31 points and 12 rebounds to lift the league-leading Boston Celtics to a 116-110 victory over the Toronto Raptors on Monday.

Pascal Siakam scored 29 points, while Scottie Barnes finished with 21 and Gary Trent Jr., added 20 for the Raptors (12-12), who lost for just the third time at Scotiabank Arena this season. O.G. Anunoby chipped in with 13 points.

Two days after a much-needed win over the last-place Orlando Magic, coach Nick Nurse said facing the league's best in Boston was a good measuring stick. The Raptors are still searching for consistency. Their longest win streak this season is two games. Boston's is nine.

He had to have been pleased with his team, which kept pace with the Celtics through most of the game, and led by as many as 10 points in the first half.

But Tatum poured in 17 points in the third quarter — one less than the Raptors combined — and when he laid it in with 2:33 left in the frame, the basket put Boston up by 13. The Celtics led 91-80 with one quarter to play.

Marcus Smart found Tatum alone in front of the Raptors bench for an easy three that stretched Boston's lead to 12, but a three-pointer by Trent and three-point play by Barnes pulled Toronto back to within six with 2:12 to play. A Siakam free throw made it a four-point game heading into the final minute.

Blake Griffin's tip shot with 26.8 on the clock put Boston back up by seven and sent hundreds of Raptors fans to the Scotiabank Arena exits.

Neither team led by more than 10 points in a tightly contested first half. The Celtics went ahead by eight late in the first quarter on a three-pointer by Sam Hauser, but the Raptors closed with a 7-0 run and trailed just 27-25 to start the second.

Toronto went on a 10-1 run in the second, capped by a couple of Christian Koloko free throws and then matched virtually every Boston basket the rest of the half to take a 62-56 lead into the halftime break.

The night marked the annual Giants of Africa game in celebration of the life and legacy of Nelson Mandela. Among the celebrities in attendance: former NFL quarterback Colin Kaepernick, who received a standing ovation when he was introduced, and Akim Aliu, co-founder of the Hockey Diversity Alliance.

The Raptors host LeBron James and the Los Angeles Lakers on Wednesday, then head to Orlando for two games against the Magic, Friday and Sunday.