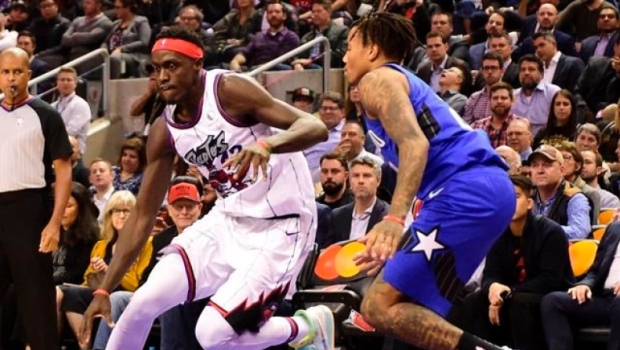 TORONTO - Pascal Siakam came out to his locker wearing a black and purple shirt with an old-school dinosaur-themed Toronto Raptors logo. On his feet were white and purple Jordans.

Although he was only a year old when the Raptors played their first season in the NBA, Siakam's loving the throwback look.

“It's pretty funny that people really like the throwbacks,” said Siakam. “When they actually came out it wasn't a thing, but whenever you throw something back, I guess it's exciting.

Siakam and his Toronto teammates wore the distinctive white, red, and purple Jurassic Park inspired jerseys in a 104-95 win over the Orlando Magic on Monday.

The hardcourt was also painted purple, white, and red with dinosaur footprints marching across the floor. It was the first of several '95 Rewind Nights the team is hosting this season.

“Love it, love it. One of my all-time favourite jerseys of any team,” said point guard Fred VanVleet. “Before I got here, after I got here, I thought it was an all-time classic look. Hopefully we get to wear it some more.”

All-star guard Kyle Lowry was even more succinct: “Sexy. That's my quote of the night.”

The callbacks to the Raptors' debut season didn't stop there.

Toronto rock band the Barenaked Ladies sang the national anthems on Monday night just as they had at the Raptors' first-ever game. Monika Deol, who rose to fame as the host of the Toronto-based dance show “Electric Circus,” did a pre-game interview because she had been the Raptors' original in-game host at the then-SkyDome.

Music from the 1990s dominated breaks in play and Canadian hip-hop icon Choclair performed his hits “Northern Touch” and “Let's Ride” as part of the half-time show.

This report by The Canadian Press was first published Oct. 28, 2019.