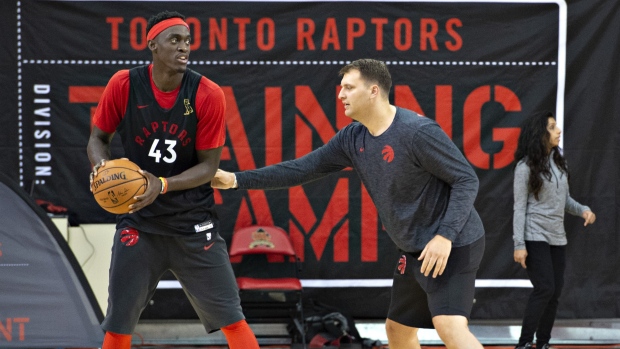 Toronto Raptors Pascal Siakam keeps the ball away from assistant coach John Corbacio during the Raptors training camp practice Tuesday, October 1, 2019 at Laval University in Quebec City. Four months to the day after COVID-19 shut down the NBA, the Toronto Raptors were finally back on the floor together. THE CANADIAN PRESS/Jacques Boissinot

Four months to the day after COVID-19 shut down the NBA, the Toronto Raptors were finally back on the floor together.

The Raptors, who'd been based in Naples, Fla., for the past two weeks, but limited in practice to one player per hoop, took the floor for the first time Saturday at Walt Disney World for the NBA's restart after the team passed its COVID-19 tests.

It felt partly like the first day of training camp, they said. But also a little like the NBA champions had never been apart.

“For the most part it was really good . . . the trust factor really, really showed up,” coach Nick Nurse said. “A lot of guys are doing a lot of things that we normally do, just right from the get-go here which was great.

“Obviously there was some rust and some things that stick out that you have to keep an eye on, or that we're going to have to change, but from a starting point it seems like a really good jumping off point today for us.”

The defending NBA champions made the two-hour trip from Naples on Thursday in style, pulling into Disney World in two black buses that, unique to the Raptors, had “Black Lives Matter” painted in huge white block letters.

They were immediately tested upon arrival in the NBA semi-bubble, which is home to 22 teams. They were tested again at 7 p.m. local time on Friday, then got the all-clear Saturday at 10 a.m.

Nurse said the testing protocol has become the new normal.

“I think the first couple times we did it here and certainly going way back to March 11 (the day the league suspended play), when we went off and got tested, your level of anxiety was a lot higher then for sure,” Nurse said. “But I think it's always: cross your fingers, knock on wood, good thoughts, all that stuff every time.”

The Raptors, who tip off the eight-game seeding round on Aug. 1 versus the Los Angeles Lakers, could be at Disney World for the next three months. Nurse packed his guitar. Marc Gasol arrived with his own Nespresso coffee machine. The players checked into rooms decorated with family photos - courtesy of Raptors staff.

Pascal Siakam said he spent the 36 hours of hotel quarantine playing video games, and thinking about “being ready mentally and being excited about being back together as a team.

“We just wanna play, man. I miss playing basketball. It definitely felt like a basketball atmosphere, and that's all I really care about.”

Nurse said he felt his way through the first practice he'd coached in four months.

“I had some thoughts about what the structure of the practice would look like and we did it totally different than we normally would,” he said. “Again just based on the situation I think it's important for us to play, but I also think it's important to kind of ease in or taper in a little bit because we're conscious of health in general.”

The coach, who'd raved last week about the fitness level of his players, went heavier than he'd expected to, and “I just told the guys to please self-monitor and let's not let's not get carried away, we got a long way to go here today.”

Siakam said while there was some rust, the Raptors, who were second in the Eastern Conference when the league shut down, were all excited to be back on the floor together.

Fred VanVleet said there was a “first day of school type” feeling for the entire team.

“We've got to flush some things out these next couple of weeks and get ready to play, but kind of take a marathon approach still, we've still got a long way to go,” the guard said.

Siakam got a new appreciation for tennis.

“I love tennis. I watch tennis all the time. Even back home, I used to watch tennis a lot,” he said. “I thought it was fairly easy to be honest until I got there. They're definitely some tough athletes in the things that they do. I definitely respect it more. It's hard. I don't think it's for me. Marc is pretty good, actually. I feel like Marc is definitely the best that I have seen play.”

The Raptors will have a chance to explore their new digs in the next few days.

“I think there will be a little bit more stuff for us to do as time goes by, and everybody gets tested and safe and locked in, I think we'll have more things to do,” VanVleet said.

Florida has been ravaged by COVID-19 in the past few weeks. The Sunshine State has topped 250,000 cases with about 10,300 new cases reported on Saturday.

VanVleet said there's a greater sense of safety in the NBA bubble.

“When we were in Naples, we couldn't control everybody else,” he said. “I think everybody inside of this bubble is under the same guidelines, so that's probably the biggest difference.”