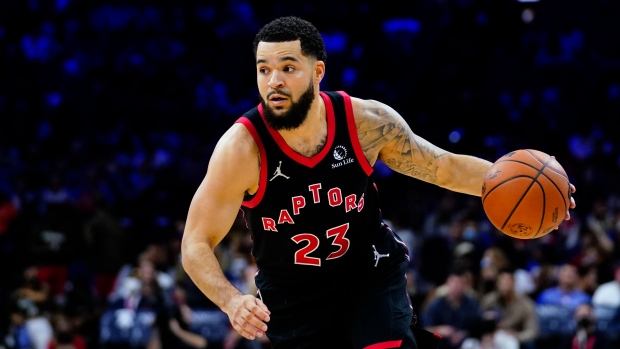 Toronto Raptors' Fred VanVleet dribbles during the first half of an NBA basketball game against the Philadelphia 76ers, Thursday, Nov. 11, 2021, in Philadelphia. (AP Photo/Matt Slocum)

NEW YORK - Toronto Raptors guard Fred VanVleet was fined US$15,000 by the NBA on Friday for making an obscene gesture during a game against Philadelphia a day earlier.

The incident occurred with 23 seconds left in the fourth quarter of the Raptors' 115-109 victory over the 76ers at Wells Fargo Center.

VanVleet had hit a key three-point shot shortly before making the gesture as he returned to the Toronto bench area.

He finished the game with a team-high 32 points.