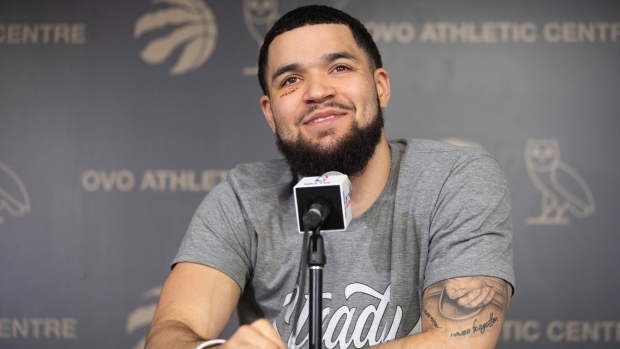 Fred VanVleet did a pre-draft workout for one particular NBA team, who didn't know who he was when he showed up.

He shot alone on a side basket with no coaches rebounding the ball. Nobody gave him a ride back to the airport.

"Those types of things will never leave me and I will never forget any of those moments," VanVleet said.

Four years after he went undrafted -- deciding that day to bet on himself if no-one else would -- VanVleet marvelled at how far he'd come.

"It's funny to see things come full-circle but that's what makes this journey that much more special, because of how I had to do it and how fast it turned around for me," he said.

The Toronto Raptors made that turn around official Tuesday, signing the guard to a four-year deal reported to be worth US$85 million.

The 26-year-old from Rockford, Ill., who joined the Raptors as a free agent in 2016, said he had wanted to stay in Toronto. The Raptors made no secret that his re-signing was their No. 1 off-season priority.

Still, VanVleet was surprised how smoothly it all went.

"It was almost like so straightforward that it made me question it a little bit, like it can't be this easy, you know what I mean?" he said.

He opened his press conference by thanking the Raptors organization, his family and even "you ugly media people on the other side of this Zoom call who have treated me pretty good in my first four years."

He grinned and asked reporters not to go hard on him now that he has "this nice big contract."

Fondly known as "Steady Freddy," he's grown into one of the team's most popular and dependable players. Paired with all-star Kyle Lowry, the duo make for one of the formidable back courts in the league.

"Everybody I spoke to that had been through it just said enjoy it and go with your gut and just try to appreciate the moment and don't fumble the bag," he said.

VanVleet spoke to reporters on a Zoom call in front of a black and white backdrop with his BOY (Bet on Yourself) brand logo.

"That's the fun part for me, seeing how this following is kind of growing and. . . watching everybody try to pretend to be underdogs and adopt the bet on yourself thing. It's becoming mainstream now, which is hilarious to me," VanVleet said.

The guard said it means a lot to have paved the way for other players who've been overlooked who found inspiration in his story.

"There are guys getting drafted now that I know for a fact wouldn't have gotten drafted in my class or before my class, just because teams are looking at it like they don't want to miss out on the next Fred VanVleet, or this kid can be Fred or better than Fred or whatever the case may be," he said.

Due to COVID-19 and Canada's travel restrictions, the Raptors will play at least the first part of the season in Tampa, Fla.

VanVleet, who hasn't been back in Canada since the league initially shut down on March 11, said he'd love to be coming back to Toronto.

"Toronto has turned into my second home. Obviously we miss the city, but I think we've got to be excited about what's ahead of us," he said.

"I can't not be excited about it. We were in Florida for a while with the bubble in Orlando, and right back there in Tampa, so hopefully it's a good experience."

VanVleet said he planned to enjoy the moment, exhale finally after the free agency stress, then get ready to for camp which opens Dec. 1. The season tips off Dec. 22.

Having achieved so much in such a short time, where does he go from here?

"The crazy part is, I've pretty much done everything I ever wanted to do already . . . everything that's on the checklist.

"It's really just the beginning of the next chapter . . . now I feel like I'm on a level playing field and I've made it, and I've got both feet inside the door, and I'm in the room and now it's time to really take off and go to another level."