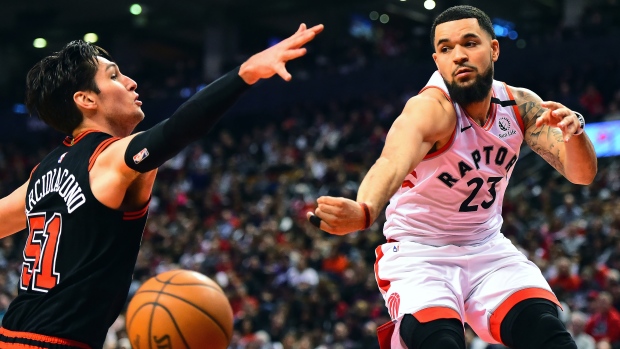 TORONTO - Fred VanVleet said he'd by lying if he hasn't thought about how the financial impact of COVID-19 will affect this summer's NBA free agency.

The Toronto Raptors guard was enjoying the best season of his career, and was set to strike it rich with a lucrative new deal this summer before the coronavirus brought the NBA and global sports to its knees in mid-March.

But VanVleet, whose tagline is “Bet on Yourself” after going undrafted in the NBA and working his way up via Toronto's G League affiliate Raptors 905, sees the bigger picture.

“People's health and well being and frame of mind is a lot more important than a couple million here or there, because we're all filthy rich compared to what we came from in the first place, so I don't think anybody's crying over it,” VanVleet said.

VanVleet started in all 48 games he played this season, and was averaging career highs of 17.6 points and 6.6 assists, making himself so valuable there were questions about whether Toronto could afford to keep the hard-nosed guard.

“I'm not one of those guys that tries to like give a vanilla answer. Yeah, I think about (free agency),” he said. “I'm human. I felt like I worked myself into a good position, I was having a helluva year and I was planning on having a great playoffs to cap that off.”

Now, what's to become of this NBA season is a massive question mark.

“More so than worry about what woulda, coulda, shoulda happened it's more so like: what's going to happen? Are they gonna move the dates around? Does free agency move? How does it affect the cap? Those things more so than thinking 'Oh, woe is me,' because it's something that happens to everybody.”

When the league closed shop on March 11, the Raptors were second in the Eastern Conference (46-18), had just locked up a playoff spot, and were coming off a five-game west coast road trip that saw them go 4-1.

There's been plenty of speculation about what the resumption of the NBA season might look like, including a shortened post-season in a neutral city like Las Vegas.

But VanVleet said he's a skeptic. He can't fathom how the NBA could resume to finish the season. Then again, big-league sport is a powerful entity, and money virtually moves mountains.

“If we're saying the timeline matters, we're saying all these certain things and you're looking around the world at what's going on with the virus itself, if our league is going to be a leader in terms of public health and player safety, you've gotta follow the guidelines of what the virus is speaking to you,” he said. “So the odds are probably against us in terms of that.

The 26-year-old was back home in Rockford, Ill., on Wednesday, lamenting the weather - it snowed there a couple of days this week making it easier to stay inside and maintain social distancing. He's staying in shape, and jokingly accused a reporter on Wednesday's conference call of being a spy for team president Masai Ujiri when asked if he's been working out.

“I got a hoop, I got a home gym in my garage, I have a Peleton bike. . . I got everything I need, I've been going in phases and weeks and once we started to see kind of the progression of when we think the games might start, I was able to kind of put a training program together,” he said.

“Took some rest when I first got home, started with some mobility, started lifting weights, started myself into cardio and a little bit of basketball. Trying to be smart about it and staying in good shape . . . I've been doing better than I would imagine I could have done.”

VanVleet, the father of a young son and daughter, said he's assembled more toys, slides, desks and chairs than he would have liked in the past few weeks, “just handymanning around the house.”

He misses his hairdresser, who lives in Toronto, saying because the Raptors were on a road trip then went almost straight into two weeks of quarantine, he hadn't had his hair cut in seven or eight weeks, and was “turning into a werewolf over here.”

Would he let his partner Shontai Neal cut his hair?

Asked if he missed the media, VanVleet laughed and said: “No, not really.”

He does miss his teammates, and speaks to fellow guard Kyle Lowry on an almost-daily basis. The Raptors all watched the first episode of Michael Jordan documentary “The Last Dance” on Monday, and there was plenty of chatter about that.

But mostly they talk about staying ready, sane and healthy. They're hopeful they get closure on a season that had them within striking distance of a long playoff run, and perhaps even a second consecutive championship.

“We felt like we had as good a chance as anybody. We put ourselves in great position throughout all the injuries and the other things going on,” VanVleet said. “We would love to have a chance to win something at the end of the year. That's all we can do, is kind of wait and hope.”