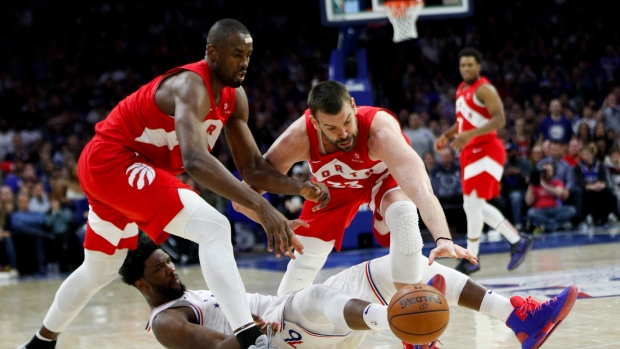 Philadelphia 76ers' Joel Embiid, bottom, and Toronto Raptors' Serge Ibaka, left, and Marc Gasol struggle for a loose ball during the second half of Game 6 of a second-round NBA basketball playoff series Thursday, May 9, 2019, in Philadelphia. (AP Photo/Chris Szagola)

TORONTO -- In the wild, unpredictable NBA Eastern Conference semifinal between the Toronto Raptors and Philadelphia 76ers, the team that seems to take control of the series in one game ends up getting humbled in the next.

The Raptors hope that trend continues Sunday, when they host a do-or-die Game 7 on the heels of a thorough 112-101 beatdown in Philadelphia on Thursday night.

The final score was flattering to the Raptors, who were down by 22 points late in the fourth quarter before both teams pulled their starters.

The Raptors' capitulation in a closeout game came after the most dominating performance in the franchise's post-season history, a 125-89 Game 5 thrashing of the Sixers in Toronto that seemed to give the Raptors a clear edge in the series.

Instead, the 76ers came out with their backs against the wall on Thursday and punched the Raptors in the mouth early en route to a statement series-tying victory.

"Both are very good ball clubs. Coached well and some guys with edge and pride," Raptors shooting guard Danny Green said. "Not going to just let teams continue to embarrass you. Come out with more anger, I guess motivation.

The wild momentum swings have been occurring since Game 1, a lopsided 108-95 Raptors win at Scotiabank Arena. Philly responded with an ugly 94-89 win in Game 2 to steal a game in Toronto. The Raptors' stone-cold shooters missed many wide-open chances in a game they arguably should have won.

Then it was the Sixers' turn in the driver's seat, and it looked like they were going to romp to a series victory after a 116-95 Game 3 win in which star centre Joel Embiid had 33 points and 10 rebounds. But the Raptors stole Game 4 to even the series, with superstar Kawhi Leonard nailing a game-clinching three-pointer over an ailing Embiid in a 101-96 rout.

That set up the latest swings -- Toronto's record blowout win in Game 5 and Philadelphia's emphatic response on Thursday.

"It's not unlike where we have been a couple of times already in this series," Raptors coach Nick Nurse said ahead of Game 7. "They are critical games. They are all critical.

"We've got to play with great physicality, great speed, connected on the defensive end. I think we have to play one of our best defensive games of the year and play with some gusto on offence."

Game 7 will likely come down to whether or not the Raptors' shots are falling from beyond the three-point line. Toronto was 40 per cent (16-for-40) from long range in Game 5 as the Raptors spread out the scoring to support Leonard, the only player on the team who has been consistently excellent in the series. But they were a woeful 25 per cent (9-for-36) in Game 6, with their misses allowing the Sixers' super-sized defenders to scoop up rebounds and set up scores in transition.

"I mean, tonight I feel like we messed up sometimes on transition and defence; we didn't knock down open shots early, you know, and they played well," Leonard said after Game 6. "They came with pace and knocked down their open shots early on, and we tried to dig ourselves out of the hole."

"We win the last game, that's all that matters," he added. "We lost some games playing their way, so it doesn't matter. I'm going to try to win."

Like the Raptors, the Sixers have been dogged with inconsistency form their key players. The exception is Jimmy Butler, who has been exceptional after a lacklustre Game 1. Butler led the Sixers with 25 points on 50 per cent shooting, eight assists, six rebounds and two steals, earning praise from Philadelphia coach Brett Brown.

"From a head coach's standpoint I go to all those things, leadership, skill, and so on and there was just an adult in the room in a Game 6 close-out that has allowed us to go play and have an amazing experience," Brown said. "I've been fortunate to be in a few Game 7s and they're very unique, they're special, they're a life lesson opportunity, and he sure allowed us to better achieve that."