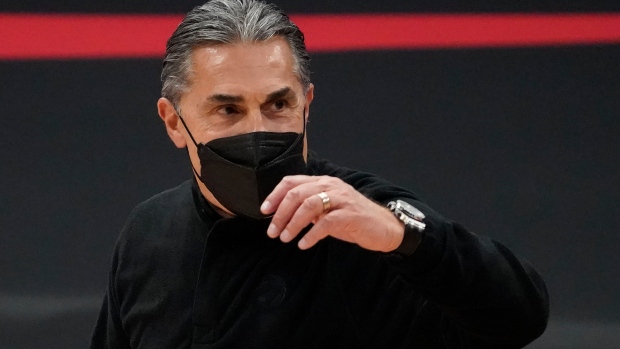 Toronto Raptors assistant coach Sergio Scariolo calls a play against the Detroit Pistons during the second half of an NBA basketball game Wednesday, March 3, 2021, in Tampa, Fla. Scariolo is filling for head coach Nick Nurse, who is out for the league's COVID protocol. (AP Photo/Chris O'Meara)

The Toronto Raptors are once again severely short-handed heading into Thursday's game against the Celtics in Boston.

For the second straight night, the Raptors will be without five players, head coach Nick Nurse and six other members of the coaching staff due to the NBA's health and safety protocols.

Starters Pascal Siakam, Fred VanVleet and OG Anunoby will not be available, as well as Malachi Flynn and Patrick McCaw.

Without the key players and members of the coaching staff, the Raptors were thumped 129-105 by visiting Detroit on Wednesday with assistant coach Sergio Scariolo in charge for the second straight game.

Meanwhile, Jalen Harris has returned to Toronto's G League affiliate, Raptors 905. Harris and Donta Hall were added to the Raptors from the 905 squad Wednesday.

Thursday's announcement was expected. General Manager Bobby Webster said in an availability Tuesday that it was unlikely that any player or member of staff who missed Wednesday's game would be available for the contest in Boston.

The NBA goes into its all-star break after Thursday's action, which will offer a welcome respite for the Raptors. Toronto's next game is March 11 against Atlanta.

This report by The Canadian Press was first published March 4, 2021.