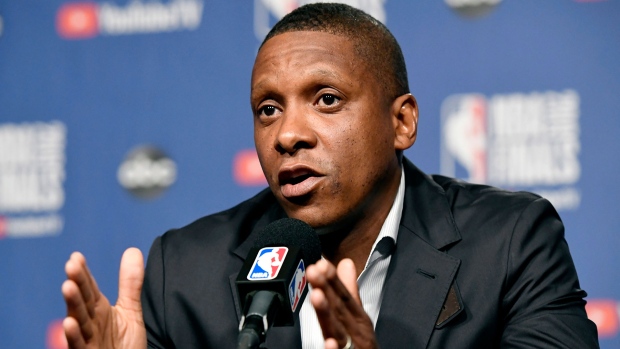 TORONTO -- Masai Ujiri paused during his keynote speech in a posh Toronto hotel ballroom on Tuesday evening to ask all the female employees of the Toronto Raptors to stand.

From coaching to physiotherapy to marketing and media relations, the Raptors women -- there are 14 -- filled their own sizeable section of the room. They drew a loud round of applause.

When Ujiri was hired by the Toronto Raptors in 2013, the team's female staff stopped at one: Doreen Doyle, the former manager of team services.

"We went from one to 14, and I'm damn proud of that," the Raptors president said.

The 49-year-old has long championed women. He dreams of seeing a female head coach, a female general manager, and even a female player in the NBA one day.

Speaking at a sold-out event Tuesday to celebrate the anniversary of the Toronto chapter of WISE -- Women in Sports and Events -- Ujiri was joined onstage by Teresa Resch, the team's VP of basketball operations, Shannon Hosford, team owner Maple Leaf Sports and Entertainment's chief marketing officer, and Sarah Chan, manager of Africa scouting.

"There's nothing like showing (success) right in front of you, and I think Teresa, Shannon and Sarah really proved that, the 14 women who work for the Raptors proved that. They were not hired because we wanted to hire women, they were hired because they're the best at what they do.

"And by the way, if anyone wants to question it, we won a championship."

Ujiri spoke about the women in his life. His mom Paula Grace, a Kenyan doctor, taught him "to be competitive, fierce, loving, giving."

He recounted a story about being 31 and telling his mom he wasn't good enough to play basketball professionally. He needed to find another career. She went out the next day and bought him two business suits.

"She said 'You are going out into the world now, go out and do your best, go out and conquer,"' Ujiri said. "I believe in every woman because of that. She inspired me to challenge, to compete, and not to be afraid, and while you do this, always care for people."

He talked about his wife Ramatu, who convinced him to interview for the Denver Nuggets' GM job, when the job, he said, already had someone else's name on it. The Nuggets were simply going through the motions. Ujiri, of course, got the job and went on to win executive of the year with Denver in 2013.

"That's how I got my big break in life, it came from her, it came from that spirit of a woman thinking, thinking ahead," he said.

He spoke about Resch, who was a volleyball player in college -- she led Augustana a berth in the NCAA tournament -- before working in the NBA head office, focusing on the league's Basketball Without Borders program.

Resch is the one colleague Ujiri said he hired both for her smarts and gender.

"I knew she was talented, (but) I needed a woman in the front office because I was tired, tired of being in front offices where it was just men, we've got egos, we've got pride, we've got all kinds of stuff, and sometimes we just go without thinking," he said. "I needed somebody to come and help me think, and think well, and think about diversity, and bringing people along."

Ujiri made Chan the first African woman to be an NBA lead scout when he hired her this season. Ujiri recounted how it was Chan who convinced him to take his Giants of Africa youth camps last summer to South Sudan and Somalia, two countries still staggering under the impact of brutal civil wars.

If Ujiri was worried about his staff's safety, Chan told him: "The effect on these girls will live forever."

Chan heard about a South Sudanese girl who was 15 and about to be married, and flew to Juba to convince the girl's parents to let her play basketball instead. A few days later, the girl was in a Giants of Africa camp in Senegal.

"I want them to see the other side of what sports can do for you, not just from an athlete standpoint, but to educate them and let them know . . . until they're able to stand on their feet, marriage is not for you," Chan said.

The NBA has set the standard for gender equity among North America's four major sports leagues, although progression is moving slowly. True success will be when a women's hiring isn't "front-page news," Resch said.

"It's tricky to find the balance between celebrating progress and finding a way where it becomes part of who we are as an organization, and nothing special that we have to celebrate or write a front-page story about," she said.

Ujiri agreed: "At some point, I'm telling you it's going to become normal. We're going to stop all these stories and stop making a fuss or big deal about any woman being hired. It will be completely normal that they're everywhere."