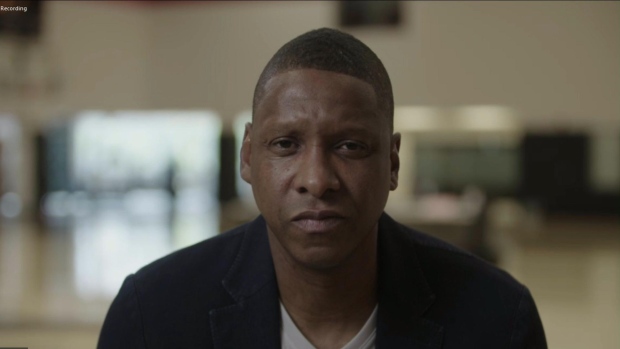 The Toronto Raptors' thrilling run to the 2019 NBA title is ancient history.

The Raptors president with the expiring contract is challenging the team's ownership group to think big, throwing the ball firmly back into their court on Wednesday.

“Everybody says, 'blank cheque, blank cheque,' but I'm not as much focused on a blank cheque,” Ujiri said of his pending contract negotiations. “We have to move forward as a franchise to compete with the best in the NBA. This is all about winning a championship again.

“Let me tell you something guys, everybody has forgotten what has happened two years ago. OK, yes, we won, but nobody cares anymore, OK?”

Ujiri's future in Toronto is the biggest question looming over the Raptors this off-season. Coming off an onerous season that saw the displaced Raptors miss the playoffs for the first time in eight seasons, falling down the standings during a COVID-19 outbreak in March, Ujiri said his family will be a factor in the decision. But the father of three gave few hints about his thinking.

Among the things Ujiri was sure about: the Raptors faced the greatest challenges of all 30 NBA teams in a season rocked by the pandemic; and the Raptors must be back playing at Toronto's Scotiabank Arena next season.

In a 40-minute media availability that ran the gamut of emotions, Ujiri pressed the issue of continued improvement.

“You want to prepare yourself to win another (title). Not play in the play-in game, not play in the playoffs,” he said. “Everybody's like, 'Why don't you get into the play-in?' Play-in for what? We want to win a championship here and we have to put ourselves in position.

Both GM Bobby Webster and head coach Nick Nurse signed multi-year contract extensions this season, but Ujiri had said he preferred to wait for the campaign to finish to begin negotiations.

The end came early for the Raptors, who were based in Tampa, Fla., and the only team displaced by the pandemic.

Ujiri pointed out the team had climbed into fourth in the East in late February before the COVID-19 outbreak that sidelined several key players and much of the coaching staff.

“We were No. 30 (out of the league's 30 NBA teams) in terms of what we went through,” Ujiri said. “We had a 1-13 month, and that was tough, to be honest. We were playing teams that were winnable games. But these guys, they were working in mud. They were running in mud. Their bodies and everything that they were going through, it was really, really tough.”

“I lived at the JW Marriott and saw him every night or every morning work out. It's incredible what he does to keep his game going,” he said of the six-time all-star. “Kyle is focused, that's 100 per cent.

“There are many things that are going to weigh into this decision and how we evaluate the team going forward . . . but Kyle is part of us and we see him a certain way, and that's an open discussion for us.”

It's difficult to imagine one without the other, and Lowry said Ujiri's decision could factor into his own.

There's been an outpouring of praise for Ujiri from Lowry, Fred VanVleet and Nurse the past couple of days, which had the executive fighting back tears on Wednesday.

“It's hard for me, because these guys are incredible for me,” he said with a catch in his voice. “To hear them say that, I sometimes honestly don't know what to say. Our players, the coaches, the staff, they're incredible for me. I go to battle every day with those guys. Every single day. I love them like they are my family.”

A family that misses home. While it's not a given that the Raptors will be able to open next season back at Scotiabank Arena, Ujiri said he's “very determined” to get the green light from the federal government.

“We want to come back and play here,” said Ujiri, who was back at Toronto's OVO Centre on Wednesday. “I don't want to speak selfishly because I know what other people, other business, other workplaces are going through . . . (but) we want to play here 100 per cent. We have no interest in going to play anywhere else.

“We are one of the safest environments that we can work with. We have operated at a very high standard and a very high level and I think we make people happy. Sports makes people happy generally and keeps people entertained in many ways. So I feel strongly about . . . begging them or asking them to include us in the plans to come back here and play.”

Ujiri wished the Toronto Maple Leafs good luck in the first round of playoffs. The Leafs will host Montreal in front of no fans at Scotiabank Arena in Game 1 on Thursday.

He closed by saying with a laugh: “I'm going to call (Prime Minister Justin) Trudeau now and tell him, man, we've got to play here.”