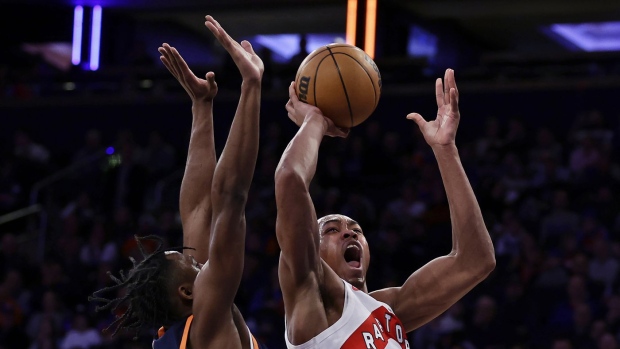 Pascal Siakam had 20 points, nine assists and eight rebounds for the Raptors, but he was on the bench after fouling out when Toronto had to wait out Jalen Brunson's missed 3-pointer in the final second before emerging with the victory.

O.G. Anunoby hit two 3-pointers in overtime as Toronto built a six-point lead, but New York nearly erased that in the final minute.

Barrett, who is from Toronto, scored 32 points and Brunson had 26 for the Knicks, who had their three-game winning streak snapped. Julius Randle finished with 21 points, 15 rebounds and eight assists.

Barnes hit two free throws for a 109-108 lead with 12 seconds left, but when he hit only one with 6.6 seconds to go, Barrett went all the way up the middle of the floor and no Raptors stepped in to stop him before his dunk made it 110-all.

Anunoby hit a couple 3s early in the extra period before Siakam, who scored a career-high 52 points in Toronto's victory here last month, converted a three-point play that made it 121-115 with 1:23 remaining.

Have a Great Rest of your Monday! pic.twitter.com/0hfMBwuYAD

Raptors: VanVleet scored just three points on 1-for-9 shooting in a loss to Atlanta on Saturday and was listed as questionable for this game with low back soreness, an injury that caused him to miss two games at the end of December.

The game began a stretch where the Raptors play 10 of their 12 games on the road. One of the home games is a rematch with the Knicks on Sunday.

Knicks: Brunson was chosen Eastern Conference player of the week after averaging 34.8 points while the Knicks went 3-1.

Raptors: At Milwaukee on Tuesday.