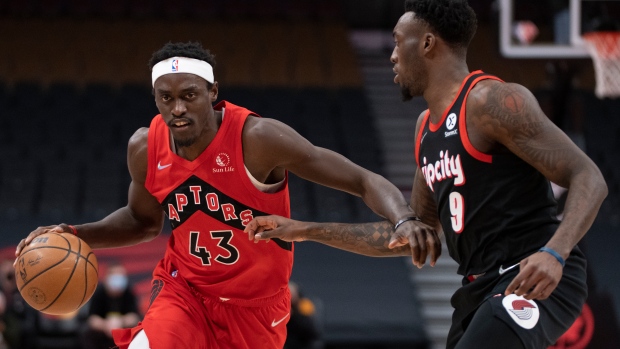 TORONTO - On a night the Toronto Raptors needed the greatest comeback in franchise history to win, they could have also used a crowd.

Pascal Siakam scored 28 points as the Raptors scraped and clawed their way from an early 34-point deficit to just four points en route to a 114-105 loss to the Portland Trail Blazers on Sunday.

And moments after, coach Nick Nurse lamented having to play in an empty Scotiabank Arena.

“Sucks. It sucks,” Nurse said. “We talk about it . . . we know what the deal is going to be. We're going to have to try to create this ourselves and just couldn't do it tonight . . . it's really disappointing. Right, wrong or indifferent. Whatever your thoughts are, it's just hard.

“But we've been through a lot of hard stuff so we can't cry about it. We've got to go play and we've got to play better than we did tonight.”

Fred VanVleet added 19 points and eight assists, while Gary Trent Jr. had 13 points and OG Anunoby and Chris Boucher chipped in with 11 points apiece for the Raptors (22-22) in their first game at home after five straight on the road.

Their weariness showed from the opening tip.

“We had really super low energy and usually we'll try anybody and everybody, keep moving guys around and try to find a unit that works and we couldn't really get that done either,” Nurse said.

“The only thing I can say is give them a helluva lot of credit for not quitting.”

Anfernee Simons had 19 points, including two big three-pointers down the stretch for Portland (20-26). CJ McCollum had 19 points and 10 rebounds, and Nassir Little also had 19 points for the visitors, who were missing both Damian Lillard (abdominal surgery) and former Raptor Norm Powell.

The Raptors went 2-3 on their recent trip, finishing with a hard-fought 109-105 win on Friday in Washington against a Wizards team at full strength.

Two nights later, in an empty Scotiabank Arena due to Ontario's COVID-19 restrictions, the Raptors had lost all their momentum. Portland raced out to a 25-4 lead. Toronto's 21-point hole had grown to a gaping 34 points by late in the second quarter.

Siakam and VanVleet kept on their teammates, saying “Let's keep going, let's keep fighting,” Siakam said. “Proud of the guys for continuing to fight. I love our fight tonight.”

The Raptors buckled down on the defensive in the third quarter -- while the piped-in fake crowd chanted “De-fence!” -- and Boucher's three-pointer with 2:15 left in the quarter capped a 30-16 Toronto run that sliced the difference to 14 points. The Blazers led 86-67 with one quarter to play.

The Raptors pressed again and when rookie Dalano Banton drove to the hoop with six minutes left, it capped a 12-0 run to slice the difference to 12 points.

“It's everyone from the coaching staff to the players, we feel like we're never out of a game until the game's over. So we feel like just how they go up, we can catch back up,” Banton said.

Toronto kept chipping away at the difference, and back-to-back three-pointers by Trent Jr. and VanVleet made it a four-point game with 1:24 to play.

Simons replied with consecutive three-pointers to put Portland back up by 10 with 41.2 seconds left, and then Little's dunk with 12.8 on the clock sealed the victory.

“It's too bad that we had one of those games, to be honest, because I think we've played really hard and tough and really focused and all that stuff,” Nurse said.

Powell didn't make the trip to Toronto, missing his eighth consecutive game, first for COVID-19 protocol and then what the team listed as personal reasons.

Nurse and VanVleet had said earlier that it feels unfair anyway for former players to return with no fans in attendance.

The Ontario government reduced crowd capacity to 1,000 fans in late December due to the crush of COVID-19 cases in the province, and Maple Leaf Sports & Entertainment Ltd., decided instead to go one step further and not host any fans starting Dec. 31. The fanless period was initially supposed to last three weeks.

The Ontario government announced last week it's relaxing restrictions to permit 50 per cent capacity on Feb. 21, and full capacity on March 14.

There was little to cheer for in the first half on Sunday.

VanVleet and Trent Jr., combined for 1-for-14 shooting in a first quarter that saw Toronto shoot a horrible 19.2 per cent from the field. The Trail Blazers seemingly couldn't miss, shooting 54.5 per cent from three-point range. The Blazers led 33-15 to start the second.

The second quarter was no better. The Blazers got 11 three-pointers from five different players in the first half, and McCollum's fadeaway jumper a minute before halftime had Portland up by 34. The Blazers took a 64-34 lead into the break.

The Raptors host the Charlotte Hornets on Tuesday then head on the road for three in a row, at Chicago, Miami and Atlanta.

This report by The Canadian Press was first published Jan. 23, 2022.