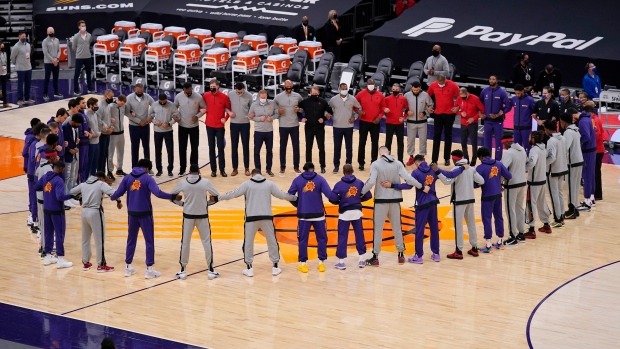 Members of the Phoenix Suns and the Toronto Raptors form a circle during the American national anthem prior to a basketball game Wednesday, Jan. 6, 2021, in Phoenix. (AP Photo/Ross D. Franklin)

PHOENIX - The Toronto Raptors and Phoenix Suns linked arms in a centre-court circle for the national anthems ahead of Wednesday night's game.

The show of solidarity came hours after a violent mob of U.S. President Donald Trump supporters stormed the U.S. Capitol and a day after news that no charges would be laid in the shooting of Black man Jacob Blake.

Wednesday's scene from the Capitol, where a mob delayed Congress from certifying the results of November's election, was discussed around the NBA before games tipped off.

“This just seems to be not-stop, and it seems to not improve.”

“I'm personally conflicted, and then I always really try to feel where I should fit in, in this picture of things,” the coach said. “Certainly, I talked to the leaders of our team. Always want to give them a platform and open line of communication and then try to evaluate from there what is going on. I support them either way, and if they decide they're gonna play, then I gotta decide I'm gonna coach 'em to the best of my ability.”

The Heat and Celtics also discussed their options before tip-off, and there was some doubt the game would actually happen.

The teams' statement said, in part: “2021 is a new year, but some things have not changed. We play tonight's game with a heavy heart after yesterday's decision in Kenosha, and knowing that protesters in our nation's capital are treated differently by political leaders depending on what side of certain issues they are on.”

Earlier in the day, Raptors guard Norman Powell voiced his frustration over the lack of charges in the Blake shooting.

Blake was shot seven times and by a Kenosha, Wisc., police officer on Aug. 23, which prompted NBA players to shut down play for three days, with the WNBA and Major League Baseball also postponing days. Blake was left paralyzed.

“Man, I'm frustrated,” Powell said after the morning shootaround. “It makes you feel like the work that you're doing is not enough. The outcries from everybody around the world coming together over these issues and topics aren't being heard. When the officers that are in charge of protecting us and keeping us safe aren't held for the responsibilities of physical abuse or aggressive aggression when it's not needed, it's tough. Who keeps them in check when they cross the line?

“It's disgusting that no charges are being brought. It's very frustrating for me to see that.”

Wednesday's riot at the Capitol interrupted the ceremonial counting of the electoral votes that will confirm President-elect Joe Biden's win.

Biden will be inaugurated exactly two weeks from Wednesday, on Jan. 20.

This report by The Canadian Press was first published Jan. 6, 2021.