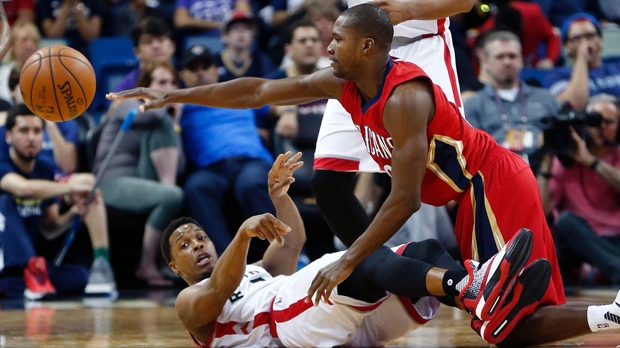 NEW ORLEANS -- DeMar DeRozan scored 23 points, Patrick Patterson had 16 and the Toronto Raptors snapped a two-game losing streak, beating the New Orleans Pelicans 115-91 on Saturday night to tie a franchise record with their 49th victory of the season.

Toronto was never pushed by the Pelicans, who were down to just nine players on the active roster because of injuries. The Raptors shot 53 per cent from the floor and the defence was nearly as good, holding New Orleans to just 43 per cent shooting.

Norman Powell scored 15 points and Luis Scola 12 for the Raptors, who set the franchise mark for wins last season.

With New Orleans' top five scorers on the bench due to injury, Alonzo Gee led the Pelicans with 18 points. Luke Babbitt added 14 points off the bench.