Raptors to take on Brooklyn Nets in 1st round of playoffs 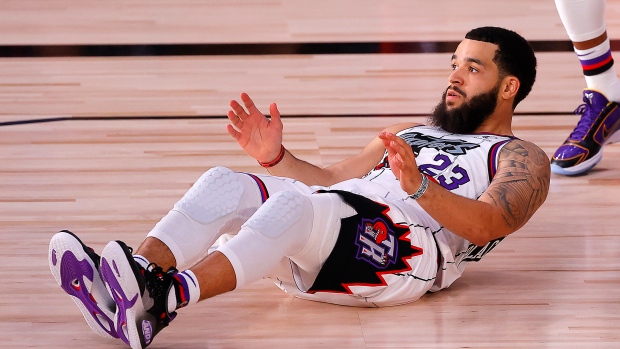 Toronto Raptors' Fred VanVleet reacts after scoring a basket and drawing the foul during the second quarter of an NBA basketball game against the Memphis Grizzlies, Sunday, Aug. 9, 2020, in Lake Buena Vista, Fla. (Kevin C. Cox/Pool Photo via AP)

LAKE BUENA VISTA, Fla. -- The Toronto Raptors will face a familiar opponent in the first round of the playoffs - the Brooklyn Nets.

The Nets clinched their spot against the defending NBA champions with Sunday night's 129-120 win over the Los Angeles Clippers.

Toronto lost to Brooklyn in seven games in the first round of the 2014 playoffs, the thrilling series that led to the creation of Jurassic Park fan zone outside the then-Air Canada Centre.

The Raptors (50-19) clinched the No. 2 seed in the Eastern Conference with Sunday's 108-99 win over the Memphis Grizzlies, and achieved 50 wins on the season for the fifth consecutive year.

The Nets' confidence is high after going 6-2 under interim coach Jacque Vaughn.

“As far as going into Toronto, you know what to expect,” Tyler Johnson said after scoring 21 points against the Clippers. “But then again, there's no home-court advantage. You play a basketball team in the same spot for however many games it takes to advance.

“So for us, it's continue to play our style of basketball and at this point we understand that if we continue to do that we're capable of beating anybody and we've shown it.”

“But for us, we feel like it's about us,” LeVert said. “If we move the ball well, if we play good defence, if we're locked into the game plan, we can win that series. We truly believe that. So we're going to go into that playoff matchup all the way locked in.”

While there is no traditional home-court advantage in the NBA bubble at Walt Disney World, Raptors coach Nick Nurse said recently that he wasn't writing it off entirely. The league has been tinkering with game presentation, Nurse said.

It includes 300 of the team's fans appearing digitally on courtside video screens and manufactured crowd noise piped into the arena. During scrimmages in the Walt Disney World bubble, it had been so quiet Nurse said the opposing teams could hear him calling plays.

“We're seeing familiar faces on those screens, and who knows what it'll evolve to here two months from now. So I don't want to discount the home court thing quite yet.”