Raptors use late free throws for 116-113 win over Hornets 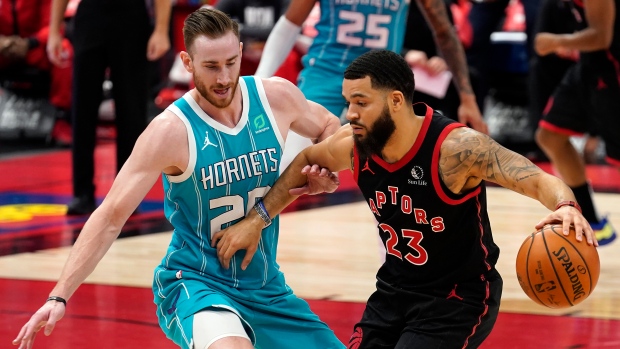 The Hornets had a chance to tie or take the lead but were called for a 24-second violation with 14.8 seconds left.

After missing eight of their first nine shots and falling behind 14-2, the Raptors got the 3s to drop, as seven players hit 13 from long distance in the first half.

They led by 12 points before the Hornets finished the half on a 14-4 spurt, trimming Toronto's lead to 66-64 on Rozier's 34-foot buzzer-beating shot.

Heyward scored 21 points in the first half on only eight shots.

Devonte Graham and Bismack Biyombo scored the first nine points of the second half for Charlotte. Then Boucher, Toronto's hottest player, was called for his fourth personal foul with 7:40 left in the third quarter.

The 6-foot-9, 200-pound Boucher sat out the rest of the period, but provided the Raptors with a big defensive and rebounding boost in the fourth quarter.

Hornets: Will play nine of there next 12 at home, starting Wednesday night against Washington.