Raptors' VanVleet: Instagram purge had nothing to do with his recent shooting slump 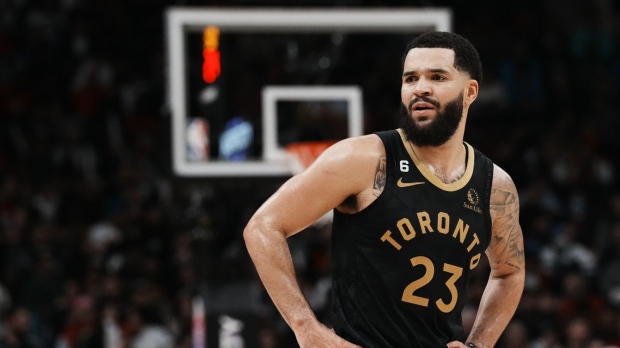 Toronto Raptors guard Fred VanVleet looks on during NBA basketball action against the Dallas Mavericks in Toronto on Saturday, November 26, 2022. VanVleet says his recent social media activity has nothing to do with his shooting slump. THE CANADIAN PRESS/Chris Young

Fred VanVleet says his recent social media activity has nothing to do with his shooting slump.

The Toronto Raptors guard caused a stir when he unfollowed his teammates on Instagram this week, but VanVleet laughed it off after Wednesday's 126-113 win over the Los Angeles Lakers.

"I unfollowed my mom too, they didn't care about that part," VanVleet said with a laugh.

VanVleet said he was trying to "fight the algorithms" after seeing numerous suggested accounts on his feed.

"That's it, nothing more, nothing less man," he added. "It's going to take more than a couple bad shooting games for me to lose my mind."

VanVleet has been mired in a slump, shooting just 3-for-12 from three-point range against L.A., and has averaged 18.7 per cent from long distance over the past five games.

He said, as a public figure, he'll be more mindful of his social media activity, but good-naturedly chastised the reporter who asked about his Instagram on Wednesday night, saying, "You’re breaking my heart bro."