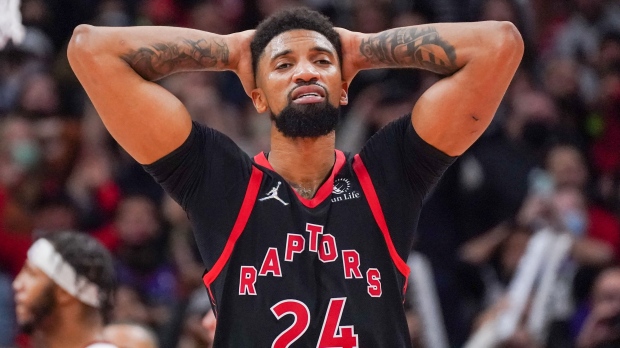 Toronto Raptors centre Khem Birch (24) reacts after his team’s loss to the Cleveland Cavaliers in NBA action in Toronto on Friday, November 5, 2021. THE CANADIAN PRESS/Evan Buhler

TORONTO - For all but a few seconds, the Toronto Raptors appeared poised to push their unlikely early-season win streak to six games Friday.

But Darius Garland's two free throws with 4.8 seconds to play lifted the Cavaliers to their first lead of the night - and a 102-101 victory that halted the Raptors' win streak at five games.

“That one felt strange to lose,” coach Nick Nurse said. “I think we played really hard and played pretty well. I just think it was strange.”

OG Anunoby had 23 points to top Toronto (6-4), while Fred VanVleet finished with 18 points. Gary Trent Jr., had 17 points and a career-high six steals.

Scottie Barnes, back after missing two games with a sprained right thumb, finished with 14. Dalano Banton chipped in with 11.

Despite the loss, the Raptors' performance this early in a rebuilding season has defied plenty of expectations. Nurse praised his team's work ethic on Friday.

“We don't get carried away (with the wins), what we're really after is playing as hard as we can,” Nurse said. “I thought we did that tonight, and we're trying to play together and keep figuring each other out and continue to work through rotations and give a super-hard effort.

Back at Scotiabank Arena after a perfect 3-0 road trip, and riding their longest win streak in nearly two seasons, the Raptors didn't trail until those final 4.8 seconds.

Toronto assembled a 12-point lead in the first half, stretched it to 15 in the third quarter, and led 80-74 to start the fourth.

Cleveland rallied down the stretch though, and Jarrett Allen's three-pointer with 4:42 to play tied the game 94-94.

Anunoby knocked down a three with 1:43 to play for five points of breathing room, but Allen scored back-to-back baskets to slice the difference to just a point with 42 seconds left.

Anunoby was whistled for tripping Garland, leading to the game-clinching free throws.

“It just takes fighting to the end,” Allen said on the Cavs' late-game heroics.

Barnes missed on a tip-in attempt on Anunoby's shot at the final buzzer.

The Raptors were excellent on the defensive end for the most of the night, forcing 19 Cleveland turnovers for 23 points.

Nurse wasn't thrilled with the officiating, saying there was a “world record for jump balls” on the night.

“Again, the ball didn't bounce our way, didn't get many breaks,” the coach said. “It seemed like every ball we had kind of cleanly turned into a jump ball quickly or somehow. We didn't do a very good job of winning any of those. Didn't do us any favours really.”

The Raptors, who still aren't at full strength, will be bolstered next week with the expected return of Pascal Siakam. The all-star forward recovering from off-season shoulder surgery is expected to make his season debut next week.

Kevin Pangos, a Canadian feel-good story of the season, made his first NBA trip to Toronto but didn't play.

The 28-year-old guard from Holland Landing, Ont., finally secured an NBA job after six years playing in Europe when the Cavs signed him in the off-season.

“He's been all over the place playing professional basketball, he stays pretty even-keeled . . . but I think a homecoming for any of us, when you make it to this level, has great emotions tied to it.”

Anunoby was a perfect 4-for-4 in the first quarter, including back-to-back running dunks during a 7-0 run. The Raptors led 29-28 to start the second.

Barnes led the way with eight points in the second quarter and Malachi Flynn's three-pointer had Toronto up late in the half. Toronto led 57-48 at halftime.

The Raptors host the Brooklyn Nets on Sunday.

This report by The Canadian Press was first published Nov. 5, 2021.