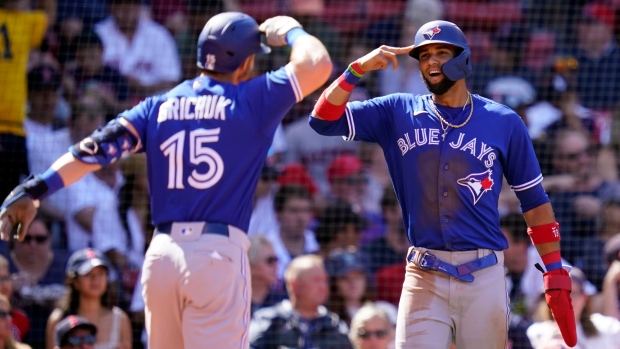 George Springer also homered as the Blue Jays topped the AL East leaders a day after a rainout at Fenway Park forced the twinbill.

Ray (9-5) gave up one run on five hits, striking out eight. Jordan Romano earned his eighth save with a perfect seventh inning.

Grichuk hit his 19th homer, a tiebreaking, two-run drive in the fourth off Garrett Richards (6-6). The drive landed into the first row of the bleachers in straightaway center field, and Springer led off the fifth with his ninth homer.

Boston scored in the first when a single by Rafael Devers set up an RBI grounder by J.D. Martinez.

Bo Bichette walked in the second, stole second and later scored on Grichuk's single back to the mound that Richards couldn't contain.

Richards went four innings, allowing four runs on four hits with one walk and two strikeouts. It was his first loss in five starts since June 23 at Tampa Bay.

Blue Jays: OF Corey Dickerson, out with a left foot contusion, began a rehab assignment Wednesday with Triple-A Buffalo, going 2 for 4 with a double, scoring a run and driving in one against Worcester. It's not clear how many rehab games he will get before being activated. “We'll see how he feels, how many at-bats he needs,” Blue Jays manager Charlie Montoyo said. â€¦ While Toronto remains hopeful RHP Julian Merryweather, out since April 14 with a left oblique strain, could return this season, that is uncertain. “Right now, he's not close,” Montoyo said.

Red Sox: RHP Hirokazu Sawamura, out since July 23 with right triceps inflammation, began a rehab assignment Wednesday, going one perfect inning with one strikeout against Buffalo. He is eligible to be activated Friday. â€¦ INF Marwin Gonzalez, out since July 13 with a right hamstring strain, could begin a rehab assignment this weekend. â€¦ INF Christian Arroyo, out since July 19 with a left hamstring strain, has not yet run and “is not close enough yet,” manager Alex Cora said. â€¦ Cora is hopeful RHP Ryan Brasier “at some point during the season is going to contribute,” but there is nothing definite.

Boston RHP Tanner Houck (0-2, 2.50 ERA) was scheduled to start the second game of the doubleheader, making his first career appearance against the Blue Jays. He will be opposed by Toronto LHP Steven Matz (8-5, 4.34), who will be making his third start of the season against the Red Sox, winning his only other start at Fenway Park.