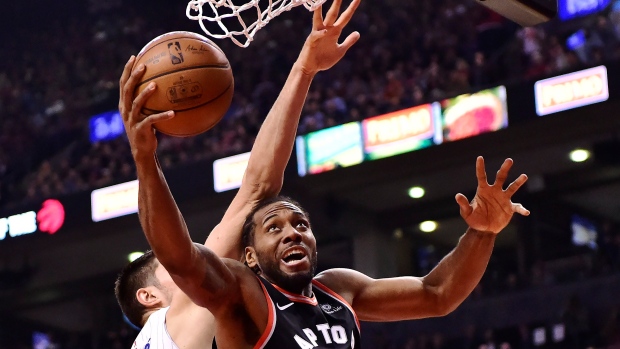 Toronto Raptors forward Kawhi Leonard (2) is fouled by Orlando Magic centre Nikola Vucevic (9) during first half NBA basketball action in Toronto on Monday, April 1, 2019. The Toronto Raptors are about to tip off perhaps the most-anticipated post-season run in franchise history. The Raptors rebuilt with a long playoff run in mind, but can't look past the Orlando Magic, who handed Toronto two of their ugliest losses of the regular season.THE CANADIAN PRESS/Frank Gunn

There are two very compelling reasons why Orlando has Toronto's attention.

"They're playing very well," Raptors coach Nick Nurse said. "Very well coached. They've got some metrics that speak volumes about who they are. They don't turn the ball over, they don't give up transition baskets, they don't let you get offensive rebounds. They're very methodical in their offensive execution. ... And they're long, man. They're long and athletic.

"It's a good squad we're playing."

Toronto came into this season with the highest of expectations, especially after getting Kawhi Leonard over the summer. The Raptors delivered in the regular season, managing Leonard's workload -- he played only 60 games -- while still finishing with the second-best record in the NBA.

"Nothing matters until now," Raptors guard Kyle Lowry said. "Now -- this is what matters."

The Magic were no playoff lock. They looked like the season was over at the end of January. But their turnaround has been stellar, and for the first time since 2012, the playoffs are their reward.

Magic coach Steve Clifford said he has a simple message to his team: "Play our game."

"You don't want to change," Clifford said. "You play well for a certain reason. What you're not going to do is reinvent yourself because it's a playoff game. Play the way we play. Play the way we've played this last 31 games. That's what we need to do."

The Raptors won't be at full strength for Game 1, and probably won't be for a while.

Key reserve OG Anunoby had an emergency appendectomy Thursday night in Toronto, after being diagnosed with acute appendicitis. There's no timetable for his return -- and the Raptors are still without Patrick McCaw, who's sidelined with a thumb injury.

But Leonard is full-go, and feeling good as well.

"We did a good job," Leonard said of the season-long load-management plan for him. "Nothing flared up or got worse. The way I'm feeling today, I feel like we did a great job."

Magic centre Nikola Vucevic said he has sensed a real change in his team over the final 31 games.

"We're more mature, in a way," Vucevic said. "We just understand what it takes to win."