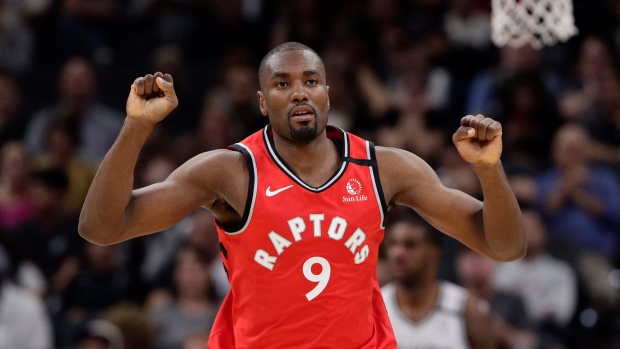 Toronto Raptors center Serge Ibaka (9) reacts after scoring against the San Antonio Spurs during the second half of an NBA basketball game in San Antonio, Sunday, Jan. 26, 2020. (AP Photo/Eric Gay)

Ibaka signed a two-year contract worth $19 million with a player option in the second season, according to reports from The Athletic and ESPN.

The 31-year-old was traded to the Raptors back in February 2017 from the Orlando Magic in exchange for Terrence Ross and a first-round draft choice.

Later that year, he signed a three-year contract worth US$65-million and would eventually play a crucial role in the Raptors' championship run in 2019.

Ibaka averaged 15.4 points per game and 8.2 rebounds a game with Toronto last season.