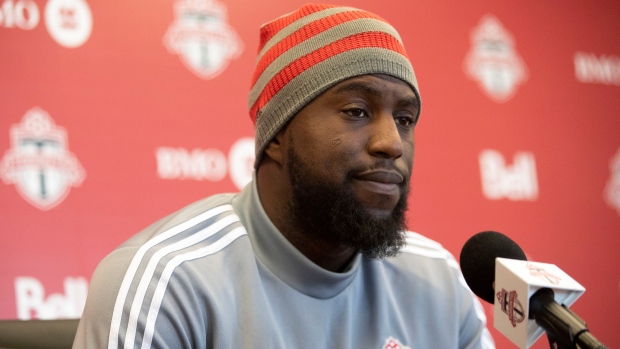 Toronto FC's Jozy Altidore speaks to the media during an end of season availability in Toronto on Wednesday, November 13, 2019. THE CANADIAN PRESS/Chris Young

Citing sources, ESPN reports that the designated player has been told to train on his own after a confrontation last Saturday with coach Chris Armas after being substituted in the 70th minute of Toronto's 1-0 loss at Orlando City.

Asked whether Altidore was indeed training apart from the first team due to a bust-up with Armas, GM Ali Curtis, in a text to The Canadian Press, replied: “Internal matter that we are keeping in-house.”

Toronto (1-3-2) plays at Columbus (2-2-2) on Saturday. The team is due to leave Friday from its pandemic-prompted base in Orlando.

The 31-year-old Altidore has appeared in four of Toronto's six games this season, with two starts, one goal and two shots. A hamstring injury and illness interrupted his early league and Scotiabank CONCACAF Champions League campaign.

It's not the first time Altidore's future with the club has come into question. In January, U.S. national team coach Gregg Berhalter turned heads when he said “a number of clubs” had expressed interest in Altidore, citing it as one of the reasons he wasn't playing in an upcoming international friendly.

The TFC striker responded on social media, saying “Don't believe everything you read. The devil is working overtime.”

Altidore is in his seventh season with Toronto, which signed him to a three-year contract extension in February 2019.

He is making US$3.6 million this season, according to the MLS Players Association.

Altidore rarely speaks to Toronto reporters, often preferring to share via social media. But he gets rave reviews from his teammates about his support and encouragement to them.

And Armas has talked up Altidore, citing his work ethic and commitment.

Altidore has butted heads with the club in the past, however.

In January 2020, he criticized it over its handling of captain Michael Bradley's ankle injury.

In April 2019, he accused Toronto president Bill Manning of putting his ego ahead of player welfare by banning a valued trainer because of his association with former TFC striker Sebastian Giovinco. A deal was soon struck to bring the trainer back into the fold and Altidore apologized.

After the NBA and other teams elected not to play in late August last year in the wake of the police shooting of Jacob Blake in Wisconsin, Altidore sat out TFC's game in Montreal for “personal reasons,” according to then-Toronto coach Greg Vanney.

This report by The Canadian Press was first published May 27, 2021