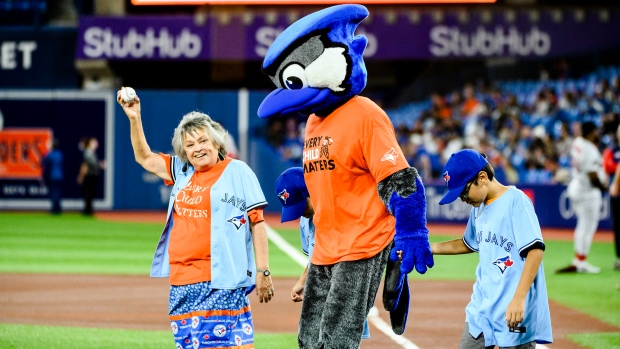 Dolores Naponse, of Atikameksheng Anishnawbek First Nation near Sudbury, Ont., walks on field with her grandsons Keewehtn and Jeffrey Cheechoo to throw the ceremonial first pitch before the start of AL MLB baseball action between the Boston Red Sox and Toronto Blue Jays in Toronto on Friday, September 30, 2022. THE CANADIAN PRESS/Christopher Katsarov

Naponse, from Atikameksheng Anishnawbek, near Sudbury Ont., threw out the ceremonial first pitch on Friday night before the Blue Jays hosted the Boston Red Sox. The 72-year-old residential school survivor was part of the pre-game ceremonies as the MLB team commemorated the National Day for Truth and Reconciliation.

“It's so important for everyone to know what has happened to all of us residential school survivors, not only the survivors, but the parents of young children who didn't survive,” said Naponse, shortly after she first stepped out on to the field at Rogers Centre with her daughter and two grandsons. “I'm glad to be here to be doing this for all of us.”

Canada's residential school system removed roughly 150,000 First Nations, Inuit and Metis children from their families. The last school closed in 1997. Many children were sexually, physically or psychologically abused in the system designed to get the “Indian” out of the child.

The Blue Jays had several pre-game and in-game acknowledgments and recognitions to honour the National Day for Truth and Reconciliation, also known as Orange Shirt Day.

The Canadian anthem was performed in Blackfoot, English and French by Tsuaki Marule, a professor at Red Crow Community College from the Blood Tribe in Southern Alberta. A moment of silence was also observed at Rogers Centre.

The Survivors' Flag was featured prominently throughout the stadium to honour survivors and all lives impacted by the residential school system.

“I think this organization does an unbelievable job of recognizing things that need to be recognized,” said Blue Jays interim manager John Schneider. “We're happy to be a part of it.”

Naponse wore a traditional Ojibway skirt that featured material with the Blue Jays logo on it, with orange ribbons, as well as the outline of an orange Every Child Matters shirt. She said it was very special to share the opening pitch with her family - 14 relatives joined her at the ballpark - even though she was nervous about getting her throw across home plate.

“This is a chance of a lifetime to do something I'd never ever expected to do,” said Naponse, who successfully delivered the pitch to Blue Jays catcher Gabriel Moreno. “I never expected to even be at a Blue Jays game at my age because we're slowing down and it's hard to get around.

“This is a good opportunity.”