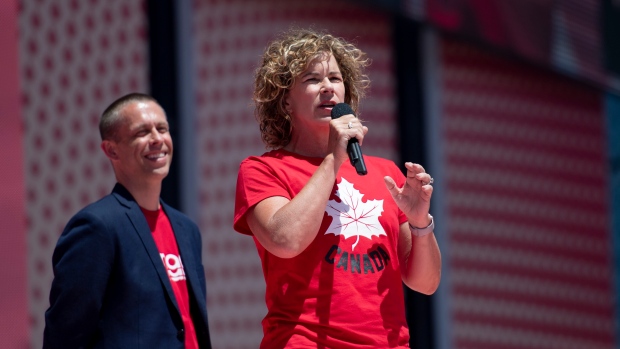 Marnie McBean, a three time Olympic gold medalist in rowing, speaks after being named the Olympic chef de mission for the Tokyo 2020 Summer Games during the Canada Day noon show on Parliament Hill in Ottawa on Monday, July 1, 2019. THE CANADIAN PRESS/Justin Tang

TOKYO -- For the second Summer Olympics in a row, a strong opening week has Canada in position to make a run at topping its all-time medal high at a non-boycotted Games.

And just like five years ago in Rio, it's Canadian women leading the charge.

With the swim team again setting the early tone, Canada entered Sunday's competition with 12 medals in Tokyo (three gold, four silver, five bronze), all won by women. Canada was on pace to challenge the 22-medal mark set in 1996 at Atlanta and equalled in 2016 at Rio.

"We've had a really lovely, steady stream of medals," Canadian chef de mission Marnie McBean said Saturday. "There's no seal on the door to the medal podium or the medals room. I think that's what Team Canada is finding.

"There's a lot of joy around and a lot of focus."

In 2016, Canada had 11 medals over the first eight days of competition following the opening ceremonies. Women won 16 of Canada's 22 medals that year.

"They can achieve whatever they want as long as they work hard, stick to their process and enjoy it. I think they can do anything they believe."

McBean said Canada is a nation that "takes inclusion to heart."

"It's not just a word, it's not just a bullet point on the page," she said. "But our sport system does support women and we value strong competitive women."

There have also been several podium near-misses.

In the pool, Oleksiak finished fourth in the 100 free, Summer McIntosh was fourth in the 400 free and two relay teams were fourth. Also just missing a medal were the men's rowing pair, women's synchro divers in the 10-metre tower, trampolinist Rosie MacLennan and weightlifter Boady Santavy.

Entering Saturday night, Canada had 25 top-five finishes in Tokyo. Joining Mac Neil at the top of the podium this week were weightlifter Maude Charron and the women's eight rowing team.

"I'm amazed at the Canadian level of high performance now," said McBean, a three-time Olympic rowing champion. "We believe that gold medals are ours."

There is plenty of medal potential for Canada over the second half of the Games.

Andre De Grasse and Damian Warner are names to watch at the track, Erica Wiebe is a medal threat again in wrestling and the women's soccer team has reached the semifinals. Canoe/kayak, basketball, boxing, sport climbing and track cycling are some of the many sports featured on the back half of the schedule.

"We've got a team here that feels that they are ready to perform because the Canadian sport system is on their side," McBean said. "They are coming here and they're feeling proud about their preparation and are ready to go."