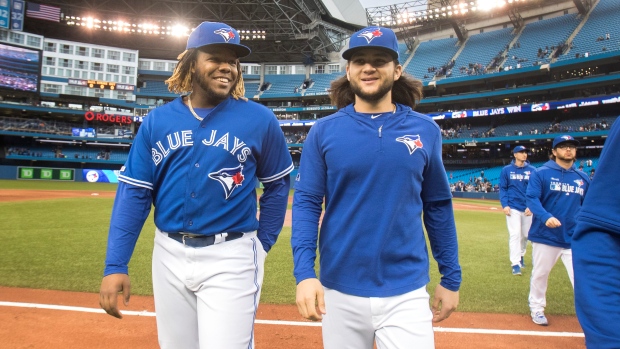 Toronto Blue Jays' Vladimir Guerrero Jr. and Bo Bichette leave the field at the end of their American League MLB baseball game against the Tampa Bay Rays in Toronto on Sunday, September 29, 2019. THE CANADIAN PRESS/Fred Thornhill

The pitching, however, remains a work in progress.

One silver lining? Strong performances from four players with famous fathers, including two sons of Hall of Famers.

Cavan Biggio played four positions and showed a veteran's eye, leading AL rookies with 71 walks. After a shaky start as a second baseman, sophomore Lourdes Gurriel Jr. was demoted to Triple-A, returned as a left fielder and hit 20 home runs in 71 games.

Those performances give the Blue Jays reason to expect better in 2020.

“I think we've got a chance to surprise a lot of people next year and come out here and be a team that people don't want to face,” Bichette said.

Guerrero's father and Biggio's dad, Craig, are both in Cooperstown. Bichette's father, Dante, starred for the Colorado Rockies, while Gurriel's father is a Cuban baseball great whose elder son Yuli plays for the Astros.

Hopes are high for many of Toronto's youngsters, but highest for Guerrero, 20, and Bichette, 21.

Half of Toronto's 20 rookies were pitchers.

General manager Ross Atkins has spoken of building multiple “waves” of minor league pitchers, the first of which is poised to start contributing next year, but acknowledged a need to add more pitching depth through free agency and trades this winter.

“I know from talking to Ross that we've got a lot of arms coming,” first-year manager Charlie Montoyo said. “They've just got to prove themselves from level to level, so we'll see.”

Here are some other things to know about the Blue Jays this off-season:

“Every time he goes to the plate people expect so much, but he's 20,” Montoyo said. “I thought he did a great job.”

Guerrero made 17 errors in 96 games at third base but showed good hands and a strong arm. Montoyo said Guerrero got better in the field but acknowledged “plenty of room for improvement.”

THE KIDS ARE ALL RIGHT

THE WAIT FOR NATE

Toronto's top pitching prospect is hard-throwing right-hander Nate Pearson, who rose from Class A Dunedin to Triple-A Buffalo, posting a 2.30 ERA in 25 starts at three levels. Pearson threw a 103 mph fastball in the Arizona Fall League last year, and reached triple digits three times at the All-Star Futures Game in 2019. He'll likely begin the 2020 season in Buffalo, but could join the Blue Jays by May or June.

At the end of his first season as a big league manager, Montoyo felt good about the way he handled a difficult campaign.

“If I look in the mirror, I'm happy with the job I did,” Montoyo said. “Everybody stayed positive and I think that was good. We didn't quit in games.”

Montoyo said he and Atkins have discussed bringing the coaching staff back intact, and possibly adding an assistant hitting coach.