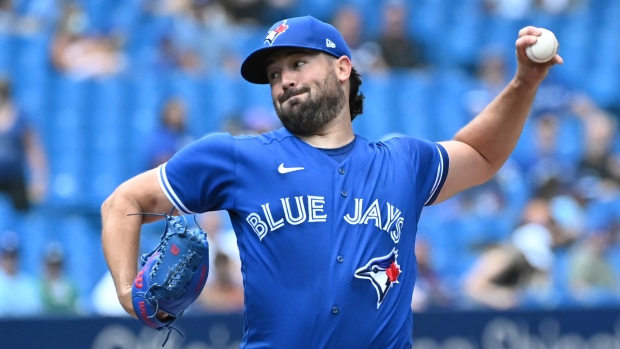 Toronto Blue Jays' Robbie Ray pitches in the first inning of an American League baseball game against the Oakland Athletics in Toronto on Sunday, Sept. 5, 2021. THE CANADIAN PRESS/Jon Blacker

Robbie Ray has won the Cy Young Award as the American League's best pitcher in 2021.

His ERA was the best in Major League Baseball while his innings pitched and strikeout totals were the best in the American League in 2021.

Ray became the first Toronto pitcher to earn the honour since the late Roy Halladay in 2003.

The lefty got 29 of 30 first-place votes from members of the Baseball Writers' Association of America. New York Yankees ace Gerrit Cole got the other top vote and finished second and Chicago White Sox righty Lance Lynn was third.

The 30-year-old Ray and cash considerations were traded to Toronto by the Arizona Diamondbacks on Aug. 31, 2020, in exchange for pitcher Travis Bergen.

Ray formally became a free agent on Wednesday after declining the one-year, US$18.4-million qualifying offer the Blue Jays made last week. Ray's decision was expected as he is poised to be one of the most sought-after players in free agency.

His Cy Young season is a big rebound after a dismal 2020. He led the majors in walks and went 2-5 with a 6.62 ERA for the Diamondbacks and Blue Jays during the pandemic-shortened season.

Ray became the fifth pitcher to win the Cy Young after a season in Toronto, along with Halladay, Roger Clemens in 1997-98 and Pat Hentgen in 1996.