Robidas made impact with Leafs' young defencemen before season-ending injury 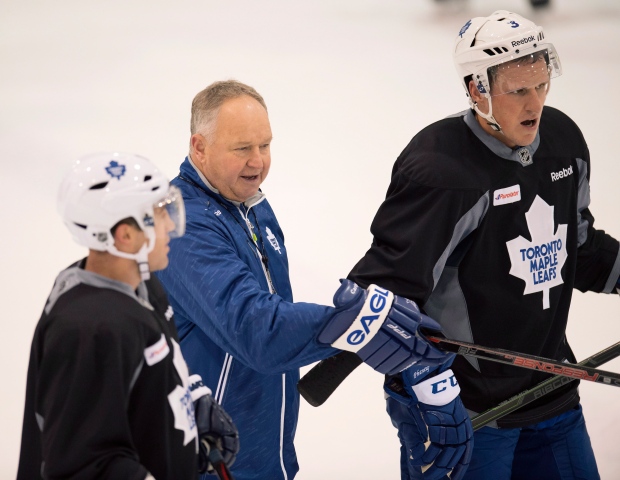 TORONTO -- With the Toronto Maple Leafs' season long lost, the decision to shut defenceman Stephane Robidas down so he can have shoulder surgery makes perfect sense.

The 38-year-old has been dealing with a torn labrum and rotator cuff in his left shoulder for much of the season, plus lingering effects from a broken leg suffered last year. With two years left on his contract at a cap hit of US$3 million, Robidas is worth much more to the future of the Leafs than he is to the present.

"He's got multiple areas in there that he just keeps playing with, and they don't get better on their own," interim coach Peter Horachek said Sunday. "So we felt this would be the best course of action."

And while Robidas scored just one goal and added six assists in 52 games, his impact on the Leafs and his departure from the locker room shouldn't be understated. Signed to be a veteran leader, Robidas was quickly made an alternate captain and brought a fresh voice to a team that needed one.

Teammates revere Robidas, especially young defencemen Morgan Rielly and Jake Gardiner, who could easily be corrupted by losing but have had the Sherbrooke, Que., native to lean on. Rielly called Robidas one of the best teammates he has ever had.

"He's been a leader, he's been trying to help me and Jake every day," the 20-year-old said. "I think when you talk to players around the league that have played with him or against him, he's got a tremendous amount of respect. He has that for a reason."

The Leafs have lost 28 of 35 games as the season went off the rails through the firing of Randy Carlyle and the tumult of the trade deadline. Robidas missed 13 games along the way as a healthy or injured scratch, but Rielly said he was a positive influence whether he was in or out of the lineup.

As this team goes into a rebuilding phase, older players like Robidas take on more value because of what they can teach impressionable teammates.

"He prepares every single day, doesn't take days off," Horachek said. "He never misses an optional skate, and he's out there every single day. He does things the right way, he works out, and he's a good example for all the younger players."

Robidas has been a full-time NHL player since 2000 and has 937 games of experience with the Montreal Canadiens, Dallas Stars, Chicago Blackhawks, Anaheim Ducks and Leafs. He has represented Canada at two world championships and played 47 Stanley Cup playoff games.

That depth and breadth of experience and Robidas' ability to reflect on it could pay dividends long after he's done playing hockey in Toronto. He's been a big help to Rielly during this trying season just by talking.