Rolling Stones to play for estimated 70,000 fans in Oro-Medonte 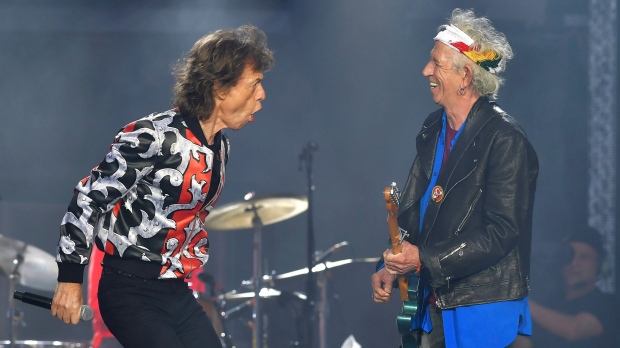 In this May 25, 2018 file photo, Mick Jagger, left, and Keith Richards, of The Rolling Stones, perform during their No Filter tour in London. (Photo by Mark Allan/Invision/AP, File)

Roughly 70,000 concertgoers are expected to gather for the iconic British band's concert tonight at the Burl's Creek Event Grounds.

The show in Oro-Medonte, Ont., about 30 kilometres north of Barrie, is the Stones' only Canadian date on their North American tour.

Anticipation for the Stones playing Canada has simmered for months after Instagram-worthy art installations of the band's infamous lips logo began appearing in busy spots around Toronto.

But the show was thrown into uncertainty when doctors ordered lead singer Mick Jagger to undergo heart surgery earlier this year. While the Canadian date was temporarily cancelled, organizers put it back on the schedule when the 75-year-old performer recovered faster than expected.

Several homegrown acts will perform before the Stones take the stage, including Saskatoon-formed One Bad Son, the Glorious Sons from Kingston, Ont., Toronto four-piece the Beaches, and longtime favourites Sloan.

Toronto cover band Dwayne Gretzky is slated to play a late-night show after the Stones set.

The day-long festival marks the third concert on the Rolling Stones tour, which kicked off with two dates in Chicago a week ago.

Guitarist Ronnie Wood assured longtime fans the band has a few surprises up their sleeve.

"They're going to get the dynamics of the band as it is now," he said earlier this month.

"None of us can actually believe how powerful it's sounding."

The Burl's Creek event carries some strict rules, including a no-smoking policy -- both cigarettes and cannabis -- that follows provincial laws of the venue as a smoke-free public space.

They will also permit only clear bags on the grounds, which means no backpacks or fannypacks. The rule, requested by promoters for the Rolling Stones, will be enforced at all of their tour stops, though it offers greater challenges at a day-long festival.

Guidelines on the Burl's Creek website say small clutch bags without a handle or strap will be permitted, as will 10-inch resealable bags.