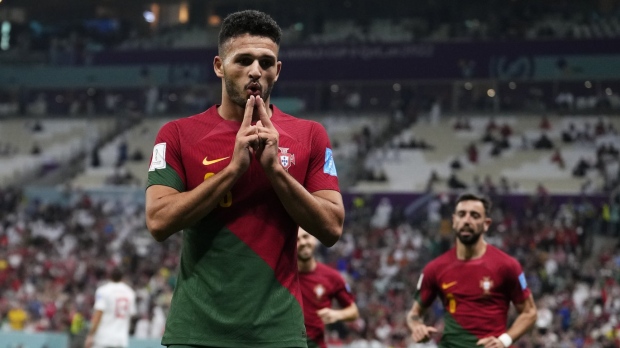 Portugal's Goncalo Ramos celebrates after scoring his his side's third goal during the World Cup round of 16 soccer match between Portugal and Switzerland, at the Lusail Stadium in Lusail, Qatar, Tuesday, Dec. 6, 2022. (AP Photo/Manu Fernandez)

LUSAIL, Qatar (AP) — A chant of “RONALDO! RONALDO!” swept around the biggest stadium at the World Cup, followed by loud jeers when the fans realized their idol wasn’t coming onto the field.

Cristiano Ronaldo was, in fact, sitting in the dugout, looking glum and still wearing a substitute’s bib. And the guy who started instead of him on Tuesday was about to score a hat trick.

After Ronaldo was dropped from the starting lineup in a bold call by Portugal coach Fernando Santos, Goncalo Ramos — the superstar striker’s unlikely replacement — made himself an instant star by leading the team to a 6-1 win over Switzerland and into the World Cup quarterfinals.

You can watch every game of the 2022 FIFA World Cup LIVE on TSN, TSN.ca and the TSN App.

Ramos, a 21-year-old forward who only made his Portugal debut last month, demonstrated the kind of clinical finishing Ronaldo was once known for in scoring the first goal in the 17th minute and adding others in the 51st and 67th.

By then, fans around the 89,000-seat Lusail Stadium were imploring Santos to bring on the 37-year-old Ronaldo. They got their wish in the 72nd minute. Portugal had the game wrapped up by then, with defenders Pepe and Raphael Guerreiro also having scored. Rafael Leao added another goal in stoppage time.

After briefly celebrating with his teammates following the final whistle, Ronaldo walked off the field on his own — perhaps wondering where his career goes from here. He is currently without a club after leaving Manchester United midway through the World Cup.

The rest of the Portugal team hung around to applaud the team’s fans at one end of the stadium. A quarterfinal match awaits against Morocco on Saturday and Santos now has to decide whether to stick with Ramos or restore Ronaldo, the top scorer in men’s international soccer and one of the game’s greatest ever players.

Ronaldo was dropped a day after Santos expressed his unhappiness at the striker’s attitude after he was substituted against South Korea in the team’s final group game.

Ramos was a surprise replacement — he had previously only made three substitute appearances for Portugal — and took his chance.

Ramos, who was only 2 years old when Ronaldo made his Portugal debut in 2003, produced the first hat trick at this year’s World Cup. He also did something Ronaldo has never achieved — score a knockout goal at soccer’s biggest tournament.

Ramos drove a rising shot with his left foot inside Switzerland goalkeeper Yann Sommer’s near post for the first goal, flicked deftly through Sommer’s legs from close range for the second, and then ran through to chip the goalkeeper for his third.

RAMOS HAS HIS HAT-TRICK!!

It's the 4th World Cup hat-trick for Portugal and the first hat-trick outside of the group stage since 1990.#FIFAWorldCup pic.twitter.com/F7Kv7lZyTa

Ronaldo was seen smiling while he was warming up on the side of the field after Ramos’ second goal.

Ramos even had an assist, playing the ball through for Guerreiro to score the fourth goal.

Ronaldo had a couple of chances after coming on, and even thought he had scored when he ran through and drove a low shot past Sommer. The goal was disallowed for offside, much to the irritation of the fans — Portuguese or from other countries — who had come to see him play.

Portugal's Cristiano Ronaldo walks during the World Cup round of 16 soccer match between Portugal and Switzerland, at the Lusail Stadium in Lusail, Qatar, Tuesday, Dec. 6, 2022. (AP Photo/Alessandra Tarantino)