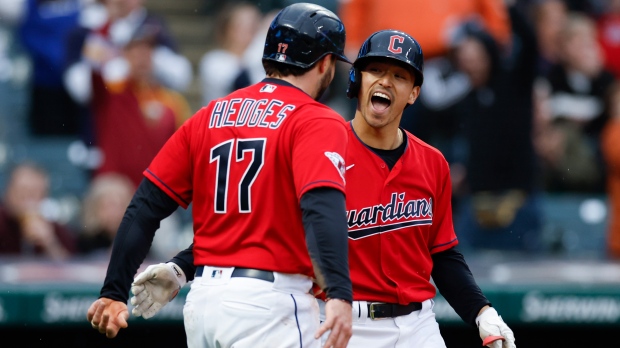 Cleveland Guardians' Steven Kwan celebrates with Austin Hedges (17) after hitting a two-run home run against the Toronto Blue Jays during the third inning of a baseball game Thursday, May 5, 2022, in Cleveland. (AP Photo/Ron Schwane)

Kwan's two-run shot off Jose Berrios tied it at 2 in the third, beginning a string of six straight runs by Cleveland. Reyes scored the go-ahead run on Amed Rosario's grounder in the fourth.

Vladimir Guerrero Jr. belted a two-run homer in the first and Alejandro Kirk added a solo shot in the seventh for Toronto. Bo Bichette had three hits and Zack Collins' two-run double in the sixth chased Civale.

Kirk's leadoff homer off Nick Sandlin sliced Cleveland's lead to 6-5, but the Blue Jays failed to push a runner into scoring position in the eighth against Bryan Shaw and did not reach base against Clase.

Berrios (2-1) allowed a season-high six runs in 4 2/3 innings, losing for the first time since Sept. 24, seven starts ago. The right-hander gave up eight hits and did not have a strikeout.

Kwan was named AL Rookie of the Month in April after batting .354 with 10 runs in 15 games. Reyes had three hits in the first five innings after entering with a .157 average.

Guardians third baseman Jose Ramirez, who leads the majors with 29 RBIs, singled in the seventh to snap an 0-for-11 slump.

Toronto began a nine-game, 11-day road trip that continues against the Yankees and Rays. Its next game at Rogers Centre is May 16 against Seattle.

Blue Jays right-hander Casey Lawrence, whose last appearance in the majors was four years ago with Seattle, worked 1 1/3 scoreless innings.

Four of the Guardians' nine home games have been played in doubleheaders after three were postponed due to inclement weather.

“I think it takes you out of it a little bit,” manager Terry Francona said. “That's why we scheduled optional hitting, but mandatory defense today.”

The forecast for Friday is more rain.

“The weather this year has already been a physical grind and a mental grind,” Toronto manager Charlie Montoyo said.

Blue Jays: OF Teoscar Hernandez (left oblique strain) will join the team in Cleveland after playing the third and final game of his rehab assignment with Class A Dunedin on Thursday. The two-time Silver Slugger recipient has been sidelined since April 14.

Guardians: 2B Gabriel Arias (right hand fracture), who made his big league debut on April 20, had surgery to repair a broken fifth metacarpal and will miss 6-8 weeks. The highly regarded prospect was hurt Sunday while playing for Triple-A Columbus.

Guardians: RHP Shane Bieber (1-1, 2.45 ERA) has pitched deeper into each of his five starts, reaching seven innings and 105 pitches at Oakland on April 30.