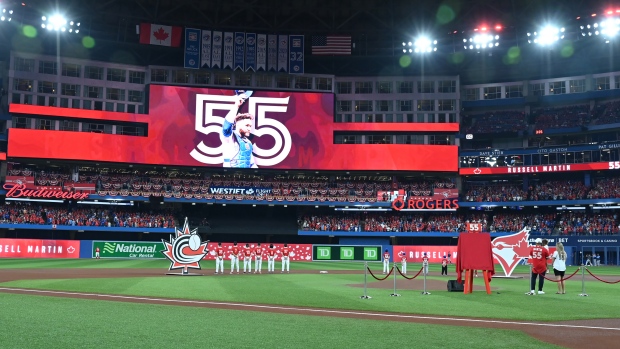 Former Toronto Blue Jays catcher Russell Martin, far right (55), watches a video display of his time with the team after announcing his retirement from professional baseball before the game between the Blue Jays and the Tampa Bay Rays in Toronto on Friday, July 1, 2022. THE CANADIAN PRESS/Jon Blacker

“Just the electricity of the crowd, you could feel the ground trembling and the energy was insane,” said Martin. “That's definitely one moment that just sticks out more than any other.”

Martin added another memorable moment on Friday, throwing out the opening pitch in front of a packed Canada Day crowd at Toronto's ballpark. He formally announced his retirement from baseball on May 28 and making an appearance at Rogers Centre was his opportunity to say thanks and farewell to Blue Jays fans.

Before the game Martin said he hoped for a “couple of claps, a couple of laughs” when he came out to throw the opening pitch. Instead, he got a rousing standing ovation from the packed ballpark and a tribute video narrated by Bautista featuring messages from several former teammates.

He threw the opening pitch to Blue Jays catcher Gabriel Moreno, who wears No. 55 as a tribute to Martin. Mustafa (Moose) Hassan, Toronto's clubhouse operations manager, told Martin last season that Moreno was going to wear his number and connected the two catches by phone.

“It's awesome,” said Martin. “He gave me a call and I just told him there's a lot of a lot of hits left in that jersey and I wish him the best.”

Born in Toronto and raised in Montreal, Martin is one of the most accomplished Canadians to ever play for the Blue Jays. The catcher had a .225 batting average, 66 home runs and 211 runs batted in, as well as an all-star game appearance, in his four seasons with Toronto.

He said that playing in Toronto on Canada Day has a different feel than a typical game at Rogers Centre.

“You feel the energy of the crowd and the crowd gets hyped for Canada Day,” said Martin, sitting in the Blue Jays dugout before the matinee game against the Tampa Bay Rays. “It's special because you get the red jerseys and the crowd feels like you're in the playoffs, even though it's not the playoffs.

“You have that energy that you don't really don't get in a regular-season game.”

Martin began his career with the Los Aneles Dodgers before moving on to the New York Yankees, Pittsburgh Pirates, Toronto, and then playing one last season back with L.A. He finished his career with a .248 average, 191 home runs, 771 RBIs, and four all-star games.

He said that he has generally stopped watching baseball, instead focusing on raising his children and playing golf. When asked if he might come out of retirement and represent Canada at an international tournament like the 2023 World Baseball Classic, Martin said it was unlikely.

“I'm so out of shape right now. As much as I'd like to think I could do it, I'm not even close to being in playing shape,” he said with a laugh. “I have too much respect for the guys that spend a lot of time in their off-season, they go to work and they're in tune.

Former Toronto Blue Jays catcher Russell Martin, far right (55), watches a video display of his time with the team after announcing his retirement from professional baseball before the game between the Blue Jays and the Tampa Bay Rays in Toronto on Friday, July 1, 2022. THE CANADIAN PRESS/Jon Blacker