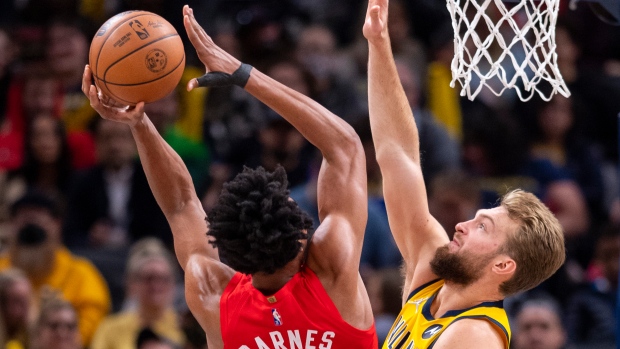 INDIANAPOLIS - Domantas Sabonis had 23 points and 18 rebounds, and the Indiana Pacers beat the short-handed Toronto Raptors 114-97 on Friday night.

Caris LeVert scored 19 points for the Pacers, who had seven double-digit scorers. Myles Turner had 17 points and 10 rebounds, Kelan Martin scored 15 points and Chris Duarte had 12.

Malcolm Brogdon and Torrey Craig each scored 11 for the Pacers, who led by nine at halftime and were never seriously threatened in the second half.

Brogdon also had 12 assists as the Pacers had a 31-17 edge in that statistic.

Fred VanVleet led the Raptors with 26 points, including four three-pointers. Scottie Barnes and Pascal Siakam each had 17. The Raptors were without two injured starters for a second consecutive game.

Martin scored 11 points in the second quarter, including a three-pointer to give the Pacers their largest first-half lead at 64-53 with 1:20 remaining. Indiana led 66-57 at halftime.

Pacers: Improved to 31-16 at home against Raptors. ... Second of a 10-game stretch with nine at home, where they are 6-3. ... Lakers star LeBron James was fined $15,000 for an obscene gesture while celebrating a late 3-pointer in overtime against the Pacers on Wednesday.