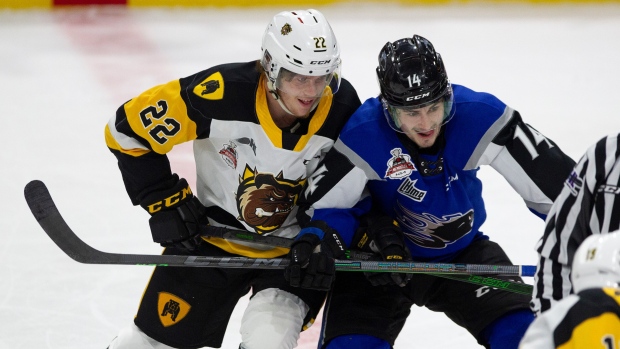 Considered a long shot at the beginning of the Canadian Hockey League championship due to a first-round loss in the Quebec Major Junior Hockey League playoffs, the host Sea Dogs downed the Hamilton Bulldogs 6-3 in Wednesday's championship game.

Saint John scored twice in the first six minutes of both the first and second periods and rode the emotion of a wildly enthusiastic sellout crowd to win the championship for the second time in its 17-year history.

Mason McTavish, with two goals, and Jan Mysak answered for the Bulldogs, who advanced to the final with a 4-3 overtime victory over Shawinigan in Monday's semifinal.

Saint John goaltender Nikolas Hurtubise, acquired by the Sea Dogs at the QMJHL trade deadline, posted his third victory of the tournament with 25 saves. Hamilton's Marco Costantini stopped 21 of 26 shots in the loss.

The 2020 and 2021 Memorial Cup events were cancelled because of the COVID-19 pandemic.

Hamilton was making its second Memorial Cup appearance after advancing to the 2018 semifinals where they fell to the Regina Pats.

The Sea Dogs defeated the Bulldogs 5-3 in the opening game of the tournament and used the same script Wednesday, scoring early.

Sevigny accepted a feed from Toronto Maple Leafs prospect William Villeneuve and his blast hit the stick of Hamilton's Arber Xhekaj and whipped past Costantini 2:35 into the game.

Just over three minutes later, Villeneuve made another slick move on the right side boards and hit MacDonald in the slot . He made no mistake when he wristed a quick shot to beat Costantini at the 5:47 mark.

McTavish picked up his fifth of the tournament when he redirected a Nathan Staios shot past Hurtubise at 7:45 to calm the crowd and give Hamilton a much needed injection of offence.

Bezeau - a forward from Rothesay, N.B., who started attending Sea Dogs games as a five-year-old boy - patiently held the puck on a rush down the right side before connecting on a wrist shot 4:41 into the second.

Dufour, who led the tournament with seven goals, ripped a feed from Ryan Francis 5:15 into the period to give the Sea Dogs a 4-1 lead.

Hamilton allowed several other golden chances but came within two goals when Mysak, the overtime hero in Monday's semifinal win over Shawinigan, had a Gavin White shot glance off him and past Hurtubise with nine seconds left in the period.

Lawrence put the Sea Dogs on the brink of the title with a sharp shot to the top corner on a feed from Dufour on a power play 6:32 into the third.

McTavish added his second of the night with 4:57 left on the game clock.

Reynolds fired a puck into an empty to seal the win at 18:43.

The Sea Dogs were bounced in the opening round of the QMJHL playoffs and their four Memorial Cup contests are the only games they have played since May 12.

It was another national title for Gardiner MacDougall, a seven time University Cup champion with the University of New Brunswick, who replaced Gordie Dwyer as head coach on May 22 and was credited for the revamped enthusiasm within the team that went 47-17-1-3 in the regular season.

The Bulldogs finished 16-3 in the Ontario Hockey League playoffs to advance to the Memorial Cup but dropped their first two games of the preliminary round to set up a series of do-or-die contests, starting with a 4-2 victory against the Edmonton Oil Kings.

In a thrilling semifinal on Monday, Mysak scored 10:08 into overtime to lift Hamilton past the Shawinigan Cataractes 4-3.

The gruelling run began has taken its run on the Bulldogs, however, as captain Colton Kammerer has not played since the second game of the OHL final against Windsor. Many other Hamilton players, including Staois, the CHL defenceman of the year, were believed to be playing with injuries.