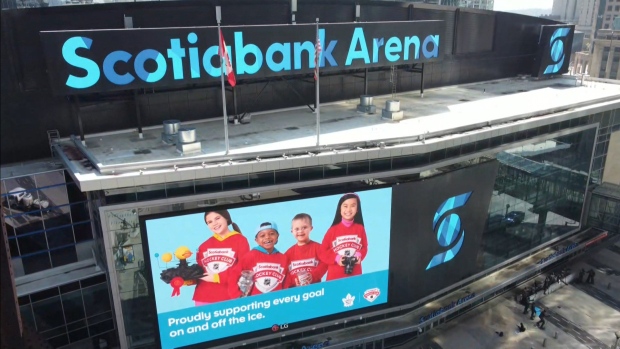 TORONTO -- Scotiabank is putting its Hockey Canada sponsorship on ice.

The financial institution said Tuesday the pause will last until it's confident the right steps are taken to improve the culture within the sport.

The development comes after the federal government froze public funding to the national federation last week in response to its handling of an alleged sexual assault and out-of-court settlement.

Hockey Canada quietly settled a lawsuit last month after a woman claimed she was assaulted by members of the country's 2018 gold-medal winning world junior hockey team at a gala and golf function four years ago in London, Ont.

Hockey Canada executives were grilled by legislators on Parliament Hill last week during a Standing Committee on Canadian Heritage meeting looking into the matter.

“Like so many of you, I was appalled by the recent reports of alleged assault involving younger ambassadors of Canada's game,” Scotiabank president and CEO Brian J. Porter wrote in an open letter. “We believe we have a responsibility as hockey lovers and sponsors to contribute to positive change in the sport.

“We are committed to ensuring that hockey is safe, inclusive and accessible.”

Porter added planned Scotiabank marketing and events at the pandemic-delayed 2022 world juniors in August will be cancelled, with the investments redirected into other programs, including one that aims to help eliminate financial barriers for young people in the game, and the women's world championship.

Business development and partnerships have previously made up 43 per cent of Hockey Canada's coffers, according to the organization's numbers, ahead of funding agencies (14 per cent), insurance premiums (13 per cent), interest revenue (10 per cent) and the taxpayer funds (six per cent).

Scotiabank said it's making a donation to the Canadian Women's Foundation, which supports victims of gender-based violence. It also expects Hockey Canada to fully co-operate with the federal government's audit and ensure the company's funding was used as intended.

Hockey Canada said Thursday it needs to “do more” to build a safer culture following a tumultuous week that included president Scott Smith and outgoing CEO Tom Renney getting called to the floor by parliamentarians.

“We were all expecting answers to all the questions, the many questions, that we have regarding how they handled the whole situation when they testified,” Pascale St-Onge, the federal government's minister of sport, told reporters in Ottawa last Wednesday.

“Unfortunately, we did not receive many answers.”

St-Onge said at the time Hockey Canada would only have its public money restored once officials produced an incomplete report by a third-party law firm hired to investigate the 2018 incident allegedly involving eight players.

She added Hockey Canada must also become a signatory to the Office of the Integrity Commissioner, a new government agency with the power to independently investigate abuse complaints and levy sanctions.

The woman who made the assault allegation, now 24 years old, was seeking $3.55 million in damages from Hockey Canada, the Canadian Hockey League and the unnamed players.

Details of the settlement have not been made public, but Smith testified Hockey Canada came up with the funds, adding no government money was used. St-Onge ordered the audit to make sure that's the case.

The Standing Committee on Canadian Heritage is set to meet July 26 and 27 to hear from more witnesses. It has also requested to see a redacted copy of the non-disclosure agreement related to the out-of-court settlement and a long list of Hockey Canada communications.

The House of Commons unanimously approved a Bloc Quebecois motion last week to pursue an independent investigation that will look into how Hockey Canada dealt with the allegations.

The organization hired Toronto law firm Henein Hutchison LLP to conduct its investigation, but Smith and Renney told MPs that while players present at the event in London were “strongly encouraged” to participate, it was not mandated.

Renney initially testified between four and six of the 19 players in question spoke with investigators before Smith indicated later the number was 12 or 13.

“Their mechanism (to investigate) is not well-functioning,” St-Onge said last week.

Hockey Canada has said repeatedly the woman declined to speak with police or its investigators.

Smith and Renney reiterated to the committee the woman also chose not to identify the players. The executives added Hockey Canada still does not know the identities of the eight players in question.

Smith said London police informed Hockey Canada its criminal investigation was closed as of February 2019. The independent investigation ended in September 2020, but Renney testified the report is incomplete and shouldn't be released despite the fact in contained recommendations.

The NHL, which has said it also only recently learned of the allegations, is conducting an investigation because some of the players in question are now in the league.

Hockey Canada received $14 million from Ottawa in 2020 and 2021, including $3.4 million in COVID-19 subsidies, according to government records obtained by CBC and TSN.

Smith testified Hockey Canada has reported three sexual assault complaints in recent years, including the London incident, but declined to discuss the other two in front of the committee.