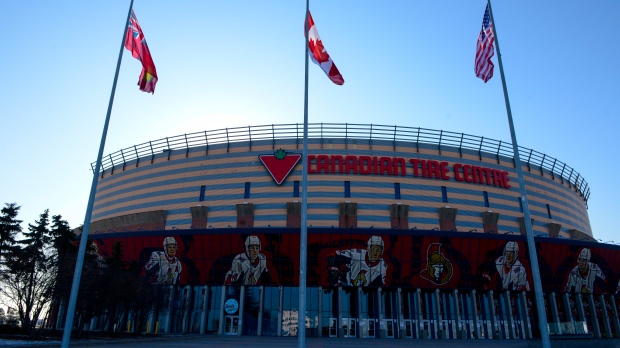 Home rink of the Ottawa Senators the "Canadian Tire Centre" is pictured in Ottawa on Thursday, March 12, 2020. THE CANADIAN PRESS/Sean Kilpatrick

The Ottawa Senators say four additional members of the organization have tested positive for COVID-19, bringing the total to six.

The team announced Wednesday that the people in question travelled with the team to California before the NHL suspended its season March 12 because of the novel coronavirus outbreak.

The Senators revealed last month that two players had also tested positive. The three-paragraph statement issued Wednesday said, “All test results have now been received, and all those who tested positive have recovered.”

The team did not specify if the additional cases were players, coaches or other members of Ottawa's staff. Senators radio colour commentator Gord Wilson disclosed Friday he had tested positive.

NHL players have been advised by the league to self-quarantine since March 13. That directive was subsequently extended to March 27 and then pushed back further to April 15 on Tuesday.

The Senators met the Sharks in San Jose, Calif., on March 7 despite a recommendation from officials in Santa Clara County against holding large public gatherings. The Avalanche played at SAP Center the following night.

Ottawa had two days off in California following their game in San Jose before meeting the Anaheim Ducks and Los Angeles Kings. Ottawa's game at the Staples Center on March 11 came 24 hours after the NBA's Brooklyn Nets - who had four players test positive - played at the same arena against the Los Angeles Lakers.

The Avalanche faced off against the Kings at Staples Center on March 9.

The COVID-19 pandemic has killed thousands of people across the globe, devastated economies and brought about an era of social distancing and self-isolation.

Most people diagnosed with COVID-19 experience mild or moderate symptoms, such as fever and cough, and the vast majority of those who contract the virus recover. Some may have few, if any symptoms, or may not know they're infected because symptoms of the novel coronavirus are similar to a cold or flu.

But for some, including Canadians aged 65 and over, those with compromised immune systems and those with pre-existing conditions, the illness can be much more severe.

This report by The Canadian Press was first published April 1, 2020