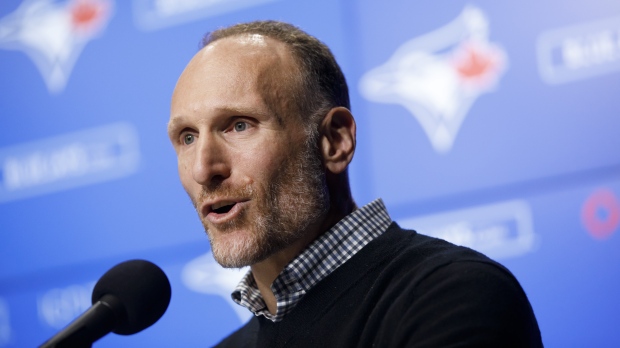 TORONTO - Blue Jays president Mark Shapiro is optimistic his team will be able play in Toronto next season, but adds there are currently too many variables to begin planning.

Speaking to reporters on a video conference call Friday, Shapiro said the Major League Baseball team is looking at alternatives should the Blue Jays find themselves nomads once again due to the COVID-19 pandemic.

The Blue Jays also hoped to play the 2020 season at Rogers Centre, but those plans were dashed when the federal government did not give its approval. A major concern was constant travel across the Canada-U. S. border.

The border remains closed to non-essential travel due to the pandemic, and those entering the country are subject to a mandatory 14-day quarantine.

“Yes, I am optimistic,” Shapiro said. “But this whole pandemic and crisis has been kind of walking the tightrope between optimism and being candid and real as to what the circumstances are.”

He conceded that opening the season in Toronto with fans at Rogers Centre is “almost impossible.” However, Shapiro said the club will wait “as long as possible” before making any concrete decisions on where it will play.

The state of COVID-19 in Canada and the U.S. in the spring, as well as the development and availability of vaccines, will be among factors to consider.

“We want to have all the information, and things are moving so rapidly,” Shapiro said. “Our optimism and our hope leads us to want to be here, but not to count on that.”

Shapiro said the Blue Jays, who spent the 2020 season at Sahlen Field - the Buffalo, N.Y., base of their triple-A affiliate - have an idea of what they're looking for should they be forced to camp south of the border. He added, however, the ability to sell tickets is not a prime concern.

“Location, proximity to the teams that we play and what travel looks like, most importantly health and safety,” he said in listing off priorities. “Somewhere in that is revenue, but that's not at the top of the list.”

Shapiro said when the Blue Jays do get back to Rogers Centre, one of the planned upgrades for the facility is new turf.

“It's not grass,” he said, but noted that a new turf surface will be permanently affixed and won't require seams.

Shapiro's comments came a two days after the Blue Jays announced their new minor-league structure to get in line with new MLB standards. All clubs had to cut down to four affiliates

While the single-A Lansing Lugnuts were a casualty in Toronto's system, the Vancouver Canadians were changed from short-season single-A to a full-season club.

“I think with Vancouver it was weighing what an incredible impact that affiliation has meant to the organization historically,” Shapiro said. “There has been something incredibly powerful about our young players going there and getting their first taste of what it means to play in Canada.”

This report by The Canadian Press was first published Dec. 11, 2020.