Sheriff's deputy involved in altercation with Ujiri has concussion: lawyer 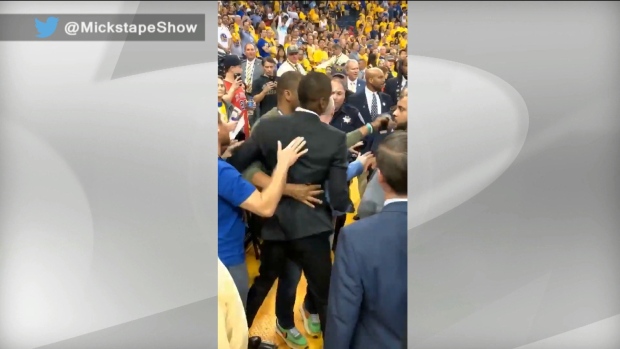 Raptors President Masai Ujiri is seen in the stands at the Oracle Arena in Oakland on June 13 after an alleged altercation with a sheriff's deputy who demanded to see his NBA credentials.

SAN FRANCISCO -- A deputy suffered a concussion, a jaw injury, and is on medical leave after an altercation with a Toronto Raptors executive as he tried to join his team on the court to celebrate their NBA championship, a lawyer said Tuesday.

“We're weighing options right now,” Mastagni told The Canadian Press. “The main goal is for the officer to get well, to take care of his health and get back to work.”

The clash between the unidentified deputy and Ujiri was alleged to have occurred as the deputy checked court-access credentials after Thursday's game against the Golden State Warriors at Oracle Arena.

Authorities say Ujiri tried to walk past the deputy but the deputy stopped him because he didn't see Ujiri's on-court credentials.

Sheriff's Sgt. Ray Kelly alleged Ujiri pushed the deputy, who pushed him back before Ujiri “made a second, more significant shove and during that shove his arm struck our deputy in the side of the head.” Kelly said Ujiri also shouted obscenities.

Several bystanders intervened and Ujiri got onto the court without displaying any credentials, Kelly alleged.

Investigators were questioning witnesses and the office hopes to file a report to prosecutors this week recommending a misdemeanour battery charge against Ujiri, Kelly said. They are also reviewing footage from body cameras worn by the deputy along with footage from the arena surveillance system and cellphones.

The office does not plan to release the deputy's body camera footage to the public during the investigation, said Kelly, who confirmed the officer is on medical leave.

The Raptors said last week the team was co-operating with the investigation and gathering information on its own. The team had no further comment Tuesday.

Warriors fan Greg Wiener, who witnessed the altercation, said last week the incident began when the deputy put his hand on Ujiri's chest and pushed him. Ujiri shoved him back before bystanders intervened, Wiener said.

He also said then that there was no conversation between the deputy and Ujiri. But on Tuesday, he told The Associated Press that he remembered the officer shouting, “No one gets on the court without credentials.”

Wiener said he recalled the detail “after thinking about it all weekend.”

Kelly said his office is investigating along with the Oakland Police Department. Mastagni, meanwhile, said there's no timeline in place for a decision on a potential lawsuit.

“The strike was unprovoked,” Mastagni alleged. “He received, unprovoked, a significant hit to his jaw causing a serious concussion, a templar mandibular joint injury, which is a serious joint injury. He is off work and disabled. He wants to go back to work.”

Kelly said last week that rather than arrest Ujiri on international television, the department decided to take the “high road” and file a misdemeanour complaint to local prosecutors.

“I can't tell the District Attorney what to do, she can take the case in under consideration and then she could wait weeks or even months,” he said Tuesday. “She has up to a year to make a decision. That being said, I would imagine that a decision would be likely made in relatively quick time.”

Kelly said he worked Game 4 in the series and was well-versed in the credential process at the venue. Since Game 6 had the potential to be a title-clinching game, an additional credential was required for post-game on-court access.

“NBA security is already a tier-one security type event, a national security event, but this game was even ramped up more,” Kelly said. “So we had several meetings before, during and after the game.

“But our marching orders in regards to security at the event from the NBA security director was that nobody is allowed on the court without a trophy credential and a follow-up yellow wristband with the trophy credential.”

Kelly added the investigation was ongoing, but alleged Ujiri did not have correct accreditation to access the court at that time.

“We were given explicit instructions that even if it was an executive or an owner that they too were not allowed on the court without the proper credentials,” he said. “It was a zero-tolerance policy.”

Ujiri has yet to publicly comment or hold a season-ending media availability after the Raptors' first NBA title. He was on hand at Monday's championship parade and celebration in downtown Toronto.