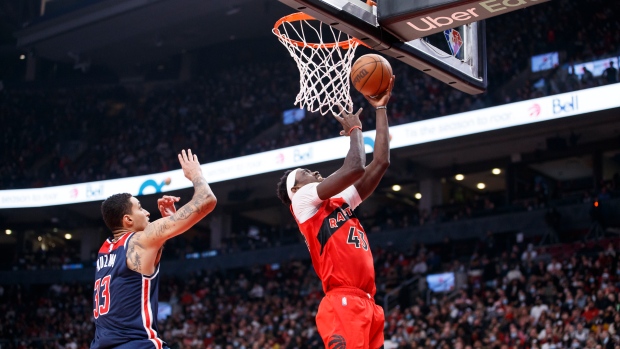 TORONTO - Pascal Siakam scored 17 of his 31 points in a key second quarter for the Raptors and Toronto beat the Washington Wizards 102-90 on Sunday.

Chris Boucher had 14 points while Scottie Barnes had 11 for the Raptors (11-13), who exacted revenge for their loss to Washington on opening night. Precious Achiuwa had 10 points and a team-high 14 rebounds, while Fred VanVleet finished with 10 points in Toronto's fourth win in their last 11 games.

The Wizards, who beat Toronto on opening night to spoil the Raptors' first game in Toronto in 600 days, arrived on Sunday in fourth place in the Eastern Conference and looking to bounce back from a 15-point loss to Cleveland two nights earlier.

Toronto was fresh off a four-point win over the Milwaukee Bucks on Friday, holding on to win with one of the best defensive efforts this season.

Their momentum carried into Sunday as the Raptors built a 25-point first-half lead, smothering the Wizards on the defensive end. Siakam shot a perfect 7-for-7 in a second quarter that saw the Raptors pour in 40 points, a season-high for a quarter.

Leading 84-68 to start the fourth, the Wizards sliced the difference to 12 points midway through the quarter, but Washington wouldn't threaten again, and when Achiuwa got his hands on an offensive rebound and drove to the hoop for a dunk, swinging from the rim to the roar of the capacity Scotiabank Arena crowd of 19,800, the Raptors were back up by 16 points with 4:15 to play.

With a game tomorrow at Indiana, the Wizards threw in the figurative towel and emptied the bench with about three minutes to play. Raptors coach Nick Nurse did the same with 1:30 to play and the game well in hand.

The Raptors' bench, which has been a weak spot this season, provided a significant spark, particularly in the first half, and outscored Washington's 34-28.

The Raptors -- who have three games to go on this season-high seven-game homestand -- remain without the frontcourt presence of OG Anunoby, sat out his ninth consecutive game with a hip injury, and Khem Birch, who missed his fifth straight and ninth this season with knee swelling. There's no timeline for the return of either player.

The pesky Raptors held Washington to just a dozen points in the first quarter. On the offensive end, six players scored, Gary Trent Jr. had a pair of three-pointers, and Toronto committed zero turnovers for a 23-12 advantage to start the second.

Siakam couldn't miss in the second, and his three-pointer with 4:59 to play had the Raptors up by 25 points. Toronto took a 63-42 advantage into the halftime break.

The Raptors sputtered in the third. They had trouble containing Caldwell-Pope, who scored 10 in the quarter, and allowed the Wizards to creep back to within 12 points.

The night marked the eighth annual Giants of Africa game in celebration of the life of Nelson Mandela. NBA commissioner Adam Silver was in attendance.

The Raptors host struggling Oklahoma City on Wednesday. On Friday, the Memphis Grizzlies demolished the Thunder 152-79, shattering the NBA record for the largest margin of victory.

This report by The Canadian Press was first published Dec. 5, 2021.