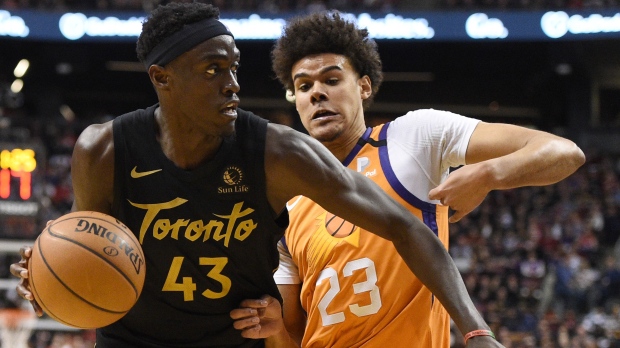 TORONTO - Pascal Siakam scored a game-high 37 points and added 12 rebounds to lead the Toronto Raptors to a 118-101 victory over the Phoenix Suns on Friday.

Siakam, who played in his first NBA all-star game last weekend, scored 17 of his 37 points in the opening quarter for the Raptors (41-15), who have won 16 of their last 17 games.

Kyle Lowry also had a double-double with 13 points and 10 assists.

Toronto has won eight in a row at Scotiabank Arena.

Devin Booker scored a team-high 21 points for the Suns (22-34), who have dropped seven of their last nine games. Deandre Ayton recorded a double-double with 17 points and 10 rebounds.

The Raptors, playing their first game in nine days due to the all-star break, showed some signs of rust early in the game by committing four turnovers in the opening five minutes and five in the quarter. The Suns failed to take advantage by shooting just 35 per cent in the first frame.

That's when Siakam went to work, scoring 14 points to give Toronto a 31-23 lead after one quarter.

The Raptors pulled further away from the Suns in the second as Terence Davis scored nine points, including five in the opening 1:21 of the frame.

Suns head coach Monty Williams called a time out to settle his team down, but the Raptors continued to find accuracy in their shooting. They finished the half at 53 per cent from the field and led the Suns by as many as 26 points.

Siakam had 25 points in the opening half as Toronto led 67-43 at the break.

The Suns began to chip away at the Raptors' lead in the third quarter, bringing it down to 13 at one point.

Serge Ibaka picked up his fifth personal while blocking Ayton five minutes into the third quarter.

Raptors coach Nick Nurse attempted to challenge the foul call, but it was not allowed because his timeout and challenge attempt occurred after officials handed the ball to Booker for the technical free throw.

The Suns continued to cut into Toronto's lead in the fourth, getting their deficit down to single digits.

Toronto was up 102-95 with 5:13 to go when Nurse used his challenge on an offensive foul charged to Fred VanVleet. The call was confirmed.

Ibaka checked into the game for the first time since picking up his fifth foul in the third. He hit a three-pointer immediately to restore Toronto's lead to double digits.