Siakam sits out practice with sore groin, status against Heat is unknown 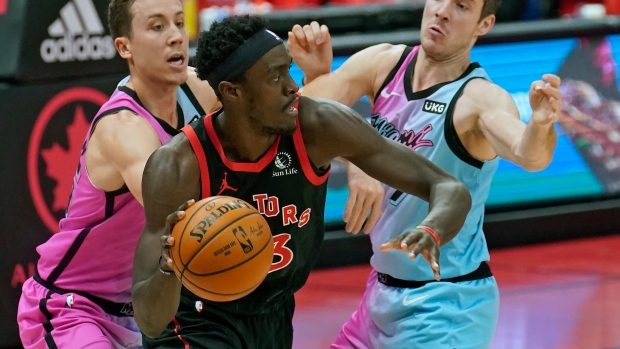 The Toronto Raptors once prided themselves on being among the best finishers in the league, and a team that was rarely outworked.

But poor finishes and sluggish play has become an annoying trend with the new-look Raptors, and while an excellent all-around 116-93 victory over Dallas on Monday was a hopeful step in the right direction, the Raptors fell back into bad habits in Wednesday's 111-102 loss to Miami.

The Raptors' shooting plunged to 28.6 per cent in the fourth quarter on Wednesday. They hit just three of 12 three-point attempts as the game slipped out of their hands.

“The ball is getting a bit stagnant when teams are going to zone. So I think we've got to get the ball moving,” Nurse said. “We worked on it a lot today and we're going to figure out a way to attack the zone, because most games when the other team is going zone that's when we struggle. We've got to figure it out.”

Since the NBA has implemented two-game series this season to cut down on travel and exposure amid COVID-19, Toronto hosts Miami again on Friday.

The status of Pascal Siakam for the rematch is unknown. The all-star forward, who has found his form over the past few games after a slow start to the season, took an awkward fall after a dunk against Miami. He walked gingerly to the bench, then revealed he's had a sore groin for awhile.

“Just a little scary fall,” Siakam said after the game. “My groin's been bothering me for a little bit, so that was definitely unfortunate.”

“I don't know what the outcome is for his status for (Friday) but he is a little sore,” Nurse said.

Siakam, who's averaged 18.8 points, 7.7 rebounds and 4.7 assists this season, finished with 18 points against Miami.

Playing Miami again so soon, meanwhile, might be a good thing.

“It's definitely a good chance to try to correct what you messed up on and try to win the next game,” forward OG Anunoby said.

It's an opportunity for retaliation, said centre Chris Boucher.

“I didn't feel like I had a good game so it just gives me a chance to play this team again and figure out a way to get better,” Boucher said. “They're a great team so somehow, some way it's good for us to play them again and figure out if we can change some of the things we messed up and see the adjustments we can make to beat them.

“So I kind of like it . . . you get a second chance to see what you can do and try to help the team another way, because (Wednesday) was not it at all.”

Boucher saw his franchise-tying record of six straight games of 15-plus points off the bench end against Miami.

The Raptors (5-9) have another back-to-back series coming up. They play at Indiana on Sunday and Monday.